Hundredweight Ice lays the foundation for the city’s most serious cocktails. 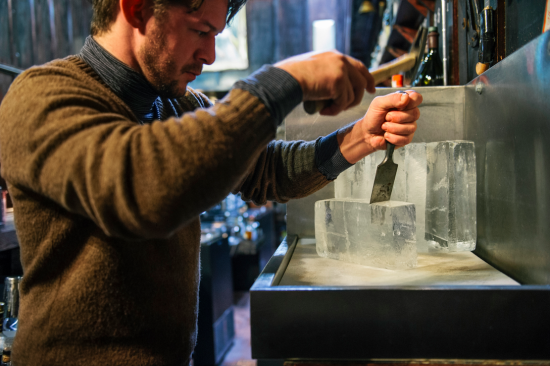 Breaking the ice. Zack Gelnaw-Rubin found a machine that freezes water from the bottom up, leaving not a single bubble within. The pristine blocks now fill rocks glasses at places like Eleven Madison Park.

It all began with a question.

When Zack Gelnaw-Rubin, Richie Boccato and Ian Present, veterans of serious drink dens like Little Branch and Milk & Honey, opened the bar Dutch Kills in Long Island City, they wanted great ice for their cocktails—which they found, by the block, at an ice-sculpting studio Okamoto nearby. But the blocks were like nothing they had ever seen.

They were completely clear—a necessity for the sculptors—without a single air bubble anywhere within. Gelnaw-Rubin wanted to know why. 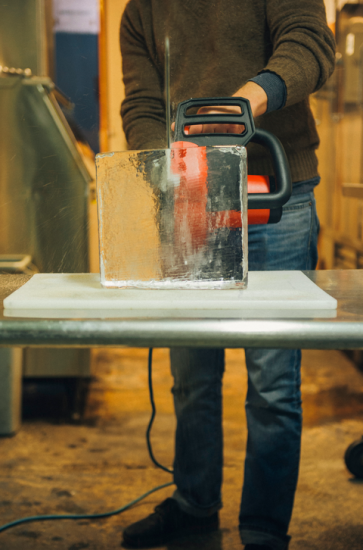 The answer was a machine called the Clinebell ice maker. According to Gelnaw-Rubin, it works by freezing the ice from just one direction. Cubes in a tray are frozen from every side, trapping air within; by freezing ice from the bottom up, the air bubbles that cause cloudiness are slowly forced up and out, leaving behind ice that contains not a single bubble. It’s as clear as a cube of glass. 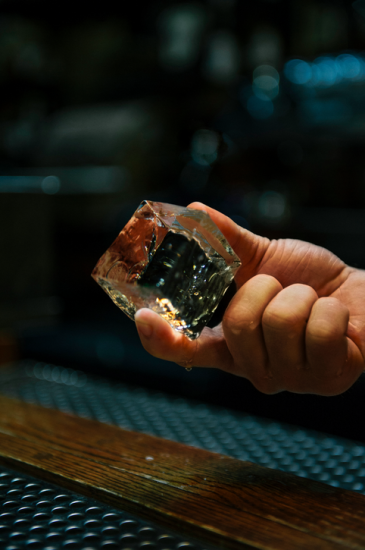 “The ice is the canvas on which you’re painting,” says Gelnaw-Rubin, of bartending. And they had found the perfect canvas.

When Boccato helped open Weather Up in Tribeca, he decided it would have its own Clinebell on location. Gelnaw-Rubin handled the hard work of setting it up and became quickly enthralled—as did the customers.

“Ice really started to fascinate me,” he says, “and people were asking, ‘Where can I get this?’” Hundredweight Ice was born, with a mission to provide impeccable canvases on which the city’s other bartenders could create their masterpieces.

In March 2011 they bought two Clinebells and started working in a space attached to Dutch Kills. The pristine ice begins life as New York tap, passed through a double charcoal filter and the ice maker’s own filtering system, then each machine takes three and a half days to produce two glistening 300-pound hunks, which the guys break down, using chainsaws and then hand tools, into more manageable blocks.

By the end of that summer they had a healthy client list, and today Hundredweight provides ice to about 20 bars and restaurants—including Attaboy, Booker & Dax, Milk & Honey and the Dead Rabbit—as well as numerous special events. 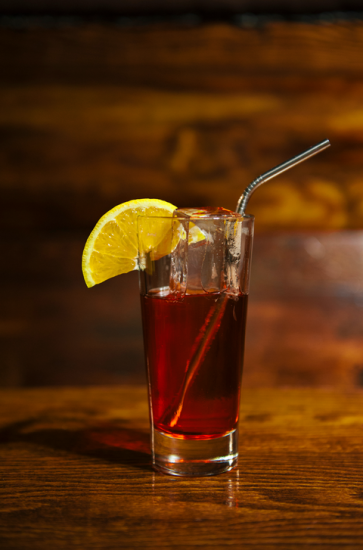 Eleven Madison Park buys two-inch ice cubes for specialty cocktails, and chips some of them into spheres for rocks drinks. Bar director Leo Robitschek says some guests get really excited about the ice, but even when people don’t notice it, he knows it’s making a difference. After all, who compliments Picasso on his canvas?