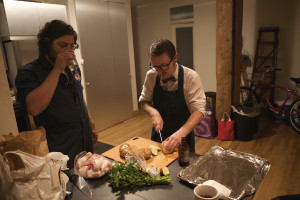 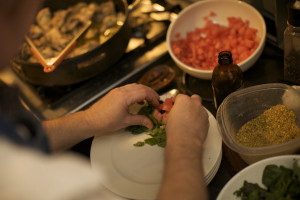 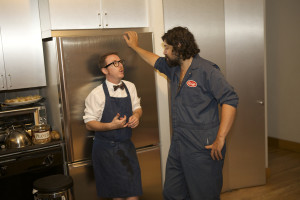 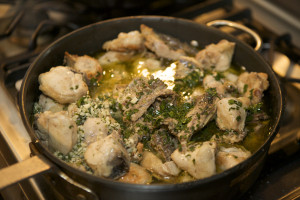 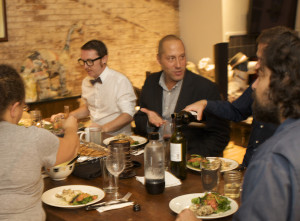 A hard rain and hurricane winds howls down Greenwich Street, tousling the hair, whipping the bow tie and mussing the mustache of 42-year-old Antonio Ortuño. Though slight in stature, much of the Spanish chef’s legs are exposed between a pair of navy-blue short shorts and brown leather oxfords. He holds a heavy load of groceries with one arm and a cell phone to his ear with the other. He peers through the gloom at an apartment’s buzzer board.

“Yonotan!” he screams into the phone. “I am at two oh seven. There is no apartment 3F!” (Addresses have been changed.)

He pauses, peering at nothing through his thick glasses as he listens intently to the voice on the other side.

A few blocks north, Jonathan Schnapp, a barbecue judge certified by the Kansas City Barbeque Society, a former deejay (DJ Workhorse) and current piñata maker, waits in the kitchen of his loft for Ortuño to arrive.

It’s 7:45 p.m. Schnapp is expecting dinner party guests to arrive in 15 minutes. Nothing is yet made. Schnapp, however, who is wearing Peterbilt coveralls, a thick beard and no shoes, doesn’t seem worried. He surveys the loft—a giant piñata dog wearing a fedora sits next to a trunk, a piñata octopus rests on top of the bookshelf, nothing at all rests on the cutting board and the table is bare.

“This is going to be beautiful,” he says. “Beautiful.”

Schnapp and Ortuño are just two users of a new socio-culinary networking Web site called Kitchensurfing.com. The site, which launched in May, is like a culinary version of AirBnB, or more precisely, its linguistic and conceptual kin, Couchsurfing.com: Chefs, by vocation or avocation, create profiles. Users browse those profiles and hire chefs to cook for private parties ranging from a brunch for four to a party for a hundred.

So far, Kitchensurfing operates only in New York City, but there are plans to expand to Berlin in the near future and the world in its entirety slightly later.

Like Couchsurfing.com, which launched in 2004 and has raised $22.6 million in venture capital in 2012 alone, kitchensurfing.com is one of those ideas, like cooking meat or sitting down, that seem obvious—once somebody else has thought of it. It’s the kind of idea in which the site’s founder, a handsome 30-year-old named Chris Muscarella, specializes.

Sitting in the test kitchen in the sprawling loft Kitchensurfing rents from a slightly less successful private chef in Boerum Hill, Muscarella speaks with the highly caffeinated McKinseyian cadence of a tech visionary. Muscarella, who grew up outside Boston, is indeed a child of the dot-com boom. He developed an early interest in applied mathematics and computer science—as well as sailing, rock climbing and skiing—which meant that in 1999, while his friends headed off to college (or not to college), Muscarella took a position as a senior software engineer at the Boston-based videoconferencing pioneer CUSeeMe.

A year later when the company was sold, Muscarella, 18 and adrift, moved to Beijing to study the martial art wushu with the Chinese national team for a few months before returning to the States to enroll in the classics program at St. John’s University in Annapolis.

After graduating—and this will be concise because biographies of people who are about your age but wildly more successful are both boring and infuriating—Muscarella moved to New York to flirt with children’s entertainment production but, he says, “after a very brief period of time I had a quarter-life crisis” and quit to help found MobileCommons.com, an innovative tech site that facilitates mobile fund-raising for political campaigns and nonprofits.

“We were heavily involved in the 2008 election,” he says, “kind of on the wrong side, with Edwards, but we’re still friends with the Obama people.”

But Muscarella eventually became disillusioned with the world of nonprofits and left the company to launch another type of business that rarely generates profit: a restaurant. In October 2010, he opened Rucola, a successful farm-to-table restaurant in Boerum Hill, with a few friends. It was a learning experience for Muscarella, and the one thing he realized was how little chefs are paid: “I was shocked,” he says.

According to a 2010 StarChefs.com survey, executive chefs get paid an average of $74,891 annually, more than double the average national income, but they also work 60 hours a week, with almost no vacation or sick days and seldom get equity participation. Compensation for line cooks rarely rises above $10 an hour.

“Chefs,” says Muscarella, sipping a Budweiser mid-afternoon on a Thursday, “get the short end of the stick. And that’s when a light bulb went on in my head.

“When you talk to a normal person and say, ‘Are you interested in having a private chef for something?’ she might say, ‘Yeah, when I get my private jet.’ But when I say, ‘You can get a pretty talented person to come cook for you by paying them double what they’re used to getting paid,’ it becomes more feasible. And so that’s interesting, and we thought, ‘Can you make that really work?’ We think the answer is yes.”

Kitchensurfing.com has the sleek functional friendly look of a site developed by guys who live and breathe coding. (Muscarella’s two partners, Lars Kluge and Borahm Cho, both have tech backgrounds.) Chef profiles include sample menus, bios and photographs. There’s an in-house e-mail exchange system. Reviews are posted on each profile, and Muscarella is hard at work at algorithms to help predict which chefs a user might fancy. Chefs set their own hourly rates, from $20 to $200, and Kitchensurfing deducts a 10 percent cut.

“Of course we want to make money,” says Muscarella, “but our ambition is to create a microcosm where everybody that participates in it does well. If we do that, we’ll be a really successful business.”

There are over 100 chef profiles currently live (and many more awaiting the informal vetting system), but already the breadth of backgrounds beggars description. Experiences range from executive chef gigs at Michelin-starred restaurants to personal chefs to passionate (and usually quite trained) amateurs.

Walter D’Rozario, the former chef de cuisine of Junoon whose Hyderabad-style chicken biryani is bright, colorful and totally beyond the powers of most home cooks, is available for only $80 an hour. Janie Tiefel Box, who left a job selling Dom Perignon and Belvedere in Napa, joined in March and has already cooked three events and been approached for a score more. Her specialty is a bacon bourbon brownie.

David Siegel, 32, is a waiter at Williamsburg’s ISA but also the former executive chef of a lauded Seattle restaurant called Bellytimber. He ran a company selling cookies made with animal fats instead of butter, like a duck-fat Chinese almond cookie with five-spice powder, but now uses Kitchensurfing to expand his skills and augment his income. He recently cooked for the 18th birthday party of twin girls on the Upper West Side.

“It was a completely different world from Bushwick,” he admits. By day, Clare Langan, 25, works as a personal chef for the ascetic and healthy. “Most of my week is spent cooking quinoa and kale, unfortunately,” she says, “so [Kitchensurfing] is a nice change.” A recent brunch Langan created included Challah French toast with blackberry compote and mascarpone and maple-roasted bacon. Not a grain of quinoa was in sight.

David Barber, who is co-owner, with his brother, chef Dan Barber of Blue Hill and Blue Hill at Stone Barns, was drawn to Kitchensurfing for the human component as much as for the food. Once a month Barber and his sons play a game he calls “dining around the world.” The boys select a country and it is up to Dad to find that cuisine in the city.

“It’s one of the things I love about living here,” he says. But riding the R train deep into Queens leaves little time for sports and homework, so recently Barber has been turning to Kitchensurfing’s array of chefs specializing in the cuisines of their country of origin, such as China, Thailand, India, Japan or Mexico.

“When they come into my home,” he explains, “and tell my family about what it is they’re cooking, why they are cooking it and how the recipes were passed through generations, it turns a meal into a cultural immersion experience. The days of chefs hanging out in dungeons being creative geniuses and letting everything on the plate do all the speaking is over, thankfully.”

Back at the piñata-filled Greenwich Street loft, the minute hand edges closer to a quarter past nine. The kitchen smells of vinegar and garlic from the pollo ajillo burbling on the stove. Rinds from a salad of watermelon with arugula and pistachio sit on the counter. An earlier olive oil spill leaves a sheen on the floor and counter. Ortuño clutches a beer; Schnapp a glass of red wine.

“Black paper! I need black paper!” says Ortuño as he prepares to serve his salpicón de pulpo, a salad of tender marinated octopus and peppers.

“Oh, pepper!” says Schnapp, grasping both the thought and the pepper mill.

“¡Si, paper!” says Ortuño and both men dissolve into laughter, caught up in a wave of bonhomie.