Escape Across the Pond to Locavore Empire River Cottage

Hundreds of people visit chef Hugh Fearnley-Whittingstall’s headquarters in the UK each week to gain new food and farming skills that are actually quite old. 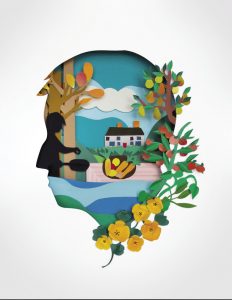 As seen on TV. Hugh Fearnley-Whittingstall launched England’s farm-to-table rediscovery through a charming series documenting his defection from London to a DIY existence raising livestock, growing tomatoes despite the weather and foraging along the seaside and hedgerows. Lucky for us, River Cottage is now not just a show, it’s also a destination. 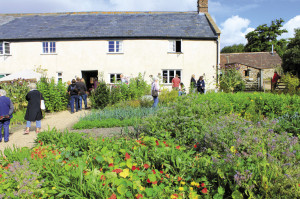 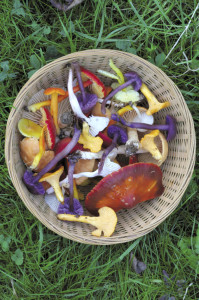 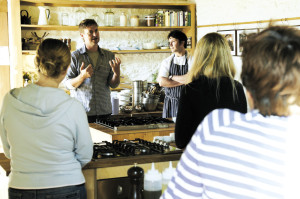 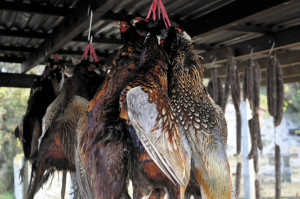 As my little rental car sped south from London on the left-side of the motorway and I thought of the English farmhouse dishes I’d be feasting on by midday, I kept thinking: Mom would love this.

I inherited my unabashed Anglophilia from her, the condition transmitted via Sunday afternoon EastEnders marathons. She hated soap operas, but apparently the presence of pubs and accents elevated this particular serial above the genre. The love of all things British continues — my dramas are usually costumed, my comedies heavy on Python and, when possible, my countryside preference veers toward the English (sorry, Hudson Valley).

I took my England mania one step further and left New York for two years of study in the UK. One of the greatest delights, beyond waking up in the middle of the Cotswolds every day, was the chance to grow my English-loving palate beyond Sunday roasts, pints of bitter and fish and chips.

Whether in a country pub seated across from a tweedy gentleman in Wellies (complete with dog underfoot), or a more elegant London dining room sharing air with one of the several famous English Hughs (Laurie, in this case), the continued evolution of British food culture has brought to the fore dishes that tell the stories of a once-vast empire’s influence on its home turf.

Asian flavors mingle with smoked fish in a warming bowl of kedgeree; the coal miner’s lunch of yesteryear is packed tightly in a Cornish pasty; and the taste buds are transported to ye olde countryside tavern when biting into the savory, cheesy Welsh rarebit.

But these are just the tip of the Anglo iceberg. Not only are chefs and eaters around England celebrating and elevating British fare, many of them are also firmly rooted in the farm-to-table ethos. “Buy British” and “UK Grown” labels dot products in every grocery aisle, and farmers, fisherman, butchers and cheese-makers are mentioned on menus, websites and pub chalkboards.

In England, this whole rediscovery is largely thanks to the work of a single chef: Hugh Fearnley-Whittingstall. Through his River Cottage television series and subsequent cookbooks, this other famous Hugh has become the face of ethical, simple and delicious cooking in England.

He came to prominence in the late ’90s through his eminently entertaining show Escape to River Cottage — a charming and informative series documenting Hugh’s defection from life in London to a DIY existence in an old gamekeeper’s cottage near the Dorset coast. Over the course of the series, Hugh and his viewers learned the ins and outs of being a “smallholder” — raising animals for meat, growing tomatoes despite the English weather, foraging along the seaside and hedgerows and gaining the acceptance of the locals in his new rural home. A slew of TV series and specials have followed, Hugh’s popularity growing exponentially with each.

But it’s not just on TV that Hugh has made his mark. His nearly 40 books, available worldwide, provide simple, seasonal recipes and educate readers about ethical, ecological agriculture. Lucky for those of us passionate about such things, River Cottage is now not just an ethos, it’s also a destination.

That’s because Hugh’s locavore empire soon outgrew its home at the titular River Cottage in the Dorset countryside, and relocated to more permanent digs nearby. Now located in Axminster, a few miles from the sea, River Cottage HQ welcomes visitors to live like Hugh. Sixty acres of rolling pastures and historic farm buildings set the scene for Beatrix Potter-esque vegetable gardens and a bit of All Creatures Great and Small (including grazing sheep and cattle, wandering hens and some sleeping sows), combined with a lauded restaurant, and food-focused educational offerings geared toward professional chefs and novices alike.

In the summer high season, 500 to 800 people a week visit River Cottage to gain new food and farming skills that are actually quite old. For those making a trip of it, courses are available as one-, two- or four-day options. Workshops offered year-round range from beekeeping and cheesemaking to a fish course called “Catch and Cook.” The game cookery class includes skinning, plucking, joining, curing and smoking. In “Pig in a Day,” students transform a whole carcass into hams, sausages and salamis. And pastry and pies class covers steamed pudding, sausage rolls, Scotch eggs and pork pie.

The hard part is getting there — and I don’t just mean England. Situated three hours southwest of London, and not accessible by train, River Cottage entails either a taxi ride that costs as much as transatlantic airfare or an opportunity to prove your mettle while driving a rental car on the wrong side of the road. I decided to get behind the wheel — after saying yes to all the insurance available lest I scrape up the left side of the car on overgrown hedgerows.

The UK is gorgeous. Fields of bright-yellow oilseed rape flowers dotted with the occasional red poppy line the road for hours on end. Another fun distraction: counting the town and county names that have also been bestowed upon breeds of pig: Gloucestershire, Tamworth, Berkshire, to name a few.

River Cottage HQ sits on a hilltop off a narrow country lane where guests are welcomed to board a tractor-drawn covered trailer. As it slowly rumbles down the hill, the TV-familiar farm buildings and landscape come into full view, surrounded by rolling pastures stretching out toward the just-out-of-sight sea.

While many visitors check into area inns and stay for several days, I had opted for the “One Day at River Cottage” course — an eight-hour experience in general cookery technique. It’s purposely kept small, allowing only eight participants at a time. The class is taught in the restaurant dining room, transformed on teaching days by replacing tables with eight individual stations equipped with pots, pans, apron, knife roll and induction cooktops. Staff offered tea and coffee and that glorious English breakfast treat, the bacon butty.

Over the subsequent hours, chef-instructor Chris Onions’s Scottish accent guided us through a variety of skills and dishes, resulting in a three-course late lunch. In addition to each of us making a loaf of farmhouse bread to take home, our menu included fish en papillote served with dandelion greens; braised beef cheeks served with leeks, carrots and nettle gnocchi; and a strawberry-rhubarb tart with a dollop of pastry cream. The strawberries had been harvested from one of River Cottage’s poly-tunnels earlier the same morning, and for each dish, Chris was able to speak to the farming practices almost as well as the cooking — illustrating how deeply connected River Cottage’s kitchens and fields are.

After devouring our work we were set loose on the farm. While my classmates explored the property and said hello to the livestock, I got a chance to step into the main house kitchen — the scene of many an episode of River Cottage, and out into the kitchen garden, to have a chat with Chris.

Before coming to River Cottage, he’d taught, cooked and farmed (sometimes simultaneously) all over the world; now he’s as passionate about soil health as the perfect piecrust.

“We live in a time now where most farms are a lot of land and one person with a huge tractor and lot of bank debt,” he said. “We really need to find other ways to do it. River Cottage is one really in- teresting example.”

In that way, it shares much in common with New York’s own Stone Barns Center for Food and Agriculture, where chef Dan Barber of the restaurant Blue Hill at Stone Barns hails Hugh.

“He introduced a new role for the chef,” says Barber, “which is not just to prepare great food, but, to the extent possible, to affect and participate in the process of its creation, conveying the entire history behind a meal. In other words, he writes a different kind of recipe, at once philosophical, gastronomical and environmental — but ultimately a recipe for flavor. What Hugh understands, like no other chef, is that you can’t talk about one without examining the others.”

Such big-picture understanding is why, over time, Hugh has been elevated above celebrity chef status to outright food and farming activist — and he’s used that platform to fantastic effect.

The best (and most recent) example of this is the “Hugh’s Fish Fight” campaign, launched in 2010. Due to European Union laws, over 50 percent of fish caught in the North Sea were being thrown back — already dead. Seeing both an enormous waste and an ecological disaster, Hugh very publicly addressed lawmakers in the UK and beyond, via televised appearances, social media and newspaper columns, rallying support across Europe. Three years later, the EU changed the law and banned the practice of discarding fish.

Not only can Hugh cook, write and talk on television; when he sets himself to it, he can literally change the world.

It was almost time for me to get back in the rental and face the left side of the road again, but before I climbed the hill, I took a walk to visit River Cottage’s livestock — including some new piglets Chris had clued me in to. I watched the little ones run from one end of the paddock to the other, while the mama sow snoozed in the corner.

Seeing animals live like this, mere feet from where future River Cottage visitors will cook and eat them, drives home Hugh’s mission. We must be mindful of what we choose to eat — and its impact on the world beyond our plate. The scene was punctuated by a salty sea breeze — a last whiff of Fearnley-Whittingstall country to send me on my way, legs a bit tired from six hours of kitchen work, but my mind and belly full.

With the variety of courses on offer, it’s not a matter of whether I’ll be back, but when. I’m keen to add sloe gin making and hedgerow foraging to my knowledge bank of all things English. I think Mom would be a wee bit jealous, but ever so pleased.

Find our editor’s favorite recipe from the River Cottage Every Day cookbook here.