Yes, We Can: Classie Parker Shows Us How It’s Done 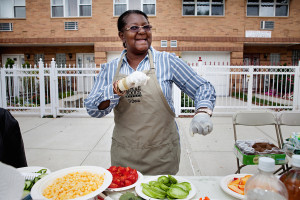 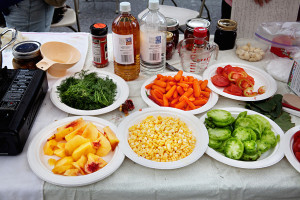 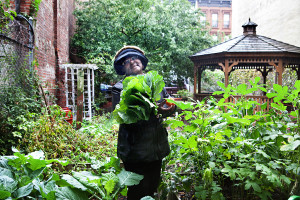 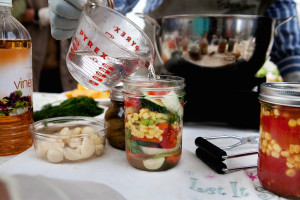 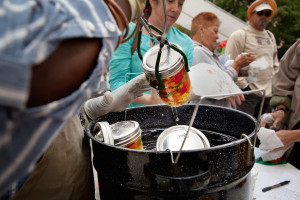 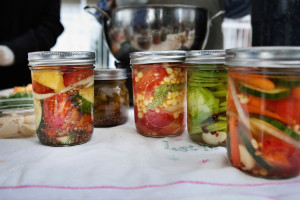 Not for nothing is Classie Parker nicknamed “the canning queen.”

“I like everyone to can with me!” she calls out, grinning from ear to ear while holding court at a block party thrown by El Flamboyan Community Garden on 150th Street, demonstrating how to can—or preserve produce by sealing it in glass jars—while KC & the Sunshine Band blares in the background.

The 57-year-old is slicing cherry tomatoes at a plastic card table she’s set up as carefully as a Food Network studio kitchen, with clean jars, produce and a boiling pot of water. “And I like everyone to boogie with me! Can you boogie?”

Classie (everyone calls her Classie or Ms. Classie, never Ms. Parker) is shimmying about in her sneakers while her audience, a collection of neighborhood families, volunteer gardeners and curious passersby, eats it up—and that’s before she starts handing out samples of homemade peach jam.

Born and raised in Harlem, Classie is the latest in a long line of gardeners and canners from South Carolina: Her family moved north in 1940. “I’ve been canning since I was five years old. My grandma, great-grandma and great-great grandma all canned,” she says. “When Grandma was in a canning mood, everyone canned. She had a pantry to die for,” says Classie, nodding with approval while the crowd swarms around her sample jars—chartreuse-hued pickled tomatoes and sticky-sweet pear jam laced with bourbon, all made with produce from the garden she keeps near her home on 121st Street.

The garden is no backyard affair—Classie is the founder and chief caretaker of Five Star Community Garden, a fertile, 1,400-square-foot edible wonder that defines the concept “labor of love.” The canned treats that Classie creates from her impressive harvests are, quite literally, the fruits of years of labor—sweet successes following decades of dogged work to green this urban patch of earth despite serious setbacks.

Those years have also taught Classie how to handle a crowd: She estimates she’s taught more than 5,000 people to can over the past 15 years, thanks to her work with city-run community garden program GreenThumb and sustainable food nonprofit Just Food. After her daily pruning, planting and weeding chores at Five Star, she’ll wheel her equipment (in an old-school metal granny cart) from a collard cooking demo at the Apollo Theater to the 5 train headed for the Brooklyn Botanical Gardens. Provided the wind doesn’t knock out her portable gas burner, she will can just about anywhere.

In front of an audience, Classie’s enthusiasm knows no bounds. Often sporting a floppy plaid chef’s hat, she’s constantly moving from student to stage, dancing and chatting with a boisterous laugh, an impossibly broad smile and words of endless encouragement for the preserva-phobes lurking in the audience.

“Come on, baby!” she coos to seniors and children alike as she helps them fill their just-sterilized jars with a Roy G. Biv–worthy array of fruits and vegetables she’s brought from her garden and neatly arranged on individual plates. “It tastes better when you put some love into it.” Classie lets her students make their own recipe rules—some tomato here, some sweet corn there. Why not throw in some cilantro? You won’t see matching jars or rhubarb-cardamom-ginger compote at the end of a Classie-led canning session.

Classie’s journey from casual home-preserver to Canning Consultant—it’s on her business cards—wasn’t lined with blue-ribbon-bedecked Ball jars. While she exudes confidence today—whether she’s teaching a group of muddy kindergarteners in Harlem or sustainability-minded master’s candidates at Yale—canning, along with gardening, began as hobbies but eventually became salvations.

Classie grew up on East 123rd Street dreaming of a career in finance, not food. Her father worked two jobs for most of his life—for 50 years, he spent his days as a machinist at Union Standard Equipment Company on 149th Street, and his nights and weekends cleaning streets and doing landscape maintenance for the town of Englewood, New Jersey, where he also kept a small garden. While he instilled in his daughter both a can-do spirit and a love of planting and growing, Classie’s mother taught her how to preserve their modest harvest.

Classie grew up, got married and moved to Long Island, working her way up the corporate ladder at Prudential Insurance. But by the late ’80s, her mother had lost both legs after a 30-year battle with diabetes, and her father suffered a serious hip injury, forcing him to retire at 77. In 1992, the strain of caring for her parents while working in Midtown and living in Long Island eventually led to her divorce, and she moved back to Harlem.

Newly single and ready to put down fresh roots, Classie turned to an activity she’d grown up with: planting vegetables, this time in a small vacant lot on 121st Street, around the corner from her house. The idea behind the garden was simple at first: “I wanted to give my dad something to do,” says Classie. “It gave him a reason to get out of the house.” But soon, she was reaping bigger benefits from that little patch of green: as the collards and strawberries and tomatoes flourished, Classie started canning the extras at home and sharing the haul with friends. “I could take out my frustration through canning. It became a real solace to me—it comforted me to know that I was taking something my parents had taught me, that my forefathers did,” says Classie with uncharacteristic gravity. “At the time,” she adds, “I had no idea it would touch so many other people.”

By 1995, with help from GreenThumb—the Parks Department’s community garden program—Classie took over an abandoned lot across from her original garden on 121st Street, which would soon be bulldozed for development.

GreenThumb provided seeds, supplies and tools, but Classie faced opposition from all sides—the neighborhood block association, the hookers who used the lot to turn tricks, the addicts who liked to use it for shooting up. Still, she persevered: She had abandoned cars towed, brought in healthy soil to replace the contaminated dirt and installed a chain-link fence; then planted until her fingers were cracked and raw: lettuces, hot peppers, beets, cabbage, okra, strawberries, herbs and more, filling the small lot with life. And all the while, she canned what she grew and gave most of it away—to nearby seniors, school kids and food pantries. “My grandmother always fed anyone who came through our house,” says Classie. “Now I do, too. The neighbors know—when I grow, they’re gonna eat.”

As the garden grew—called Five Star Community Garden, it now sports a gazebo, and neighbors have donated various benches and picnic tables for perching under her flower-lined arched trellises—so, too, did Classie’s confidence. “The amount of joy I got from gardening was really life-changing,” says Classie. “I sat in the garden for 10 years just to see what kind of people would come in, figuring out which direction to go, what it would mean to a community.” She left the garden gates open and watched as the neighborhood came together to plant tidy seedlings and dig through weeds. “It got people together that I never thought would get together,” says Classie. “It changed the animosity between homeowners and tenants. It brought people, families, even former lovers back together. I got to meet the lady who planted the first rosebush on this block in the ’20s,” recalls Classie, recounting the story with her usual flair: “They wheeled her into my garden, and she told me, ‘I never thought I would see this.’ Then she smiled. They took her back in her brownstone and she died that night.”

Seeing Classie’s enthusiasm, GreenThumb was soon asking their star gardener to teach canning workshops at other community gardens nearby. It was at one class in the mid-’90s when a young Just Food intern approached her after a class. “She said, ‘Classie, I’ve seen you teach canning classes—what do you think about training other people to teach like you do?’” recalls Classie. “’Canning is a lost art that more people should know.’” (Classie’s been involved with Just Food for so long that neither she nor the organization remembers exactly when she started.) So Classie signed up for the nonprofit’s first-ever Training of Trainers program, a three-day workshop that taught her how to extol the virtues of canning to the leaders of other community gardens, schools and CSAs so they could in turn teach their students and members.

“I was really nervous during my first class,” recalls Classie, “but then I made it my own—I just decided to be me, and then my class really took off. I was just having fun.”

And so were her students, who loved to boogie with Classie so much they’ve blossomed in number faster than the fragrant purple sage that’s taking over one of the reclaimed whisky-barrel planters in Classie’s garden. “Now my class at GreenThumb is so big I have to split it up—I don’t even have sitting room,” she sighs. She’s been in steady demand for over a decade now, teaching everyone from Alzheimer’s patients in the Bronx to bachelorette parties in Southampton. “I figure since I’ve trained thousands of people to can, they won’t call me back to the same places, but my phone keeps ringing.” She was laid off from Prudential in 2002, and since then has worked a handful of other real jobs, but today she lives mainly off of savings and a stipend from Just Food for her classes. Most of her time is now spent in the garden, in the kitchen and in front of an audience.

In fact, just last year Just Food honored her with a Community Leader award at their annual Let Us Eat Local benefit, a celebrity-chef-studded affair held at the Altman Building in Flatiron. Classie swapped her casual duds for a shimmery dress for the occasion and was so overwhelmed when she came onstage to receive the honor that she could barely speak, a rare occurrence indeed.

“People find canning intimidating,” says Just Food’s Jessica Gaffney. “By making her workshops fun and approachable, Classie literally invites people to the table.” (To boogie, and to take part in madcap, ingredient-mixing free-for-alls.) Classie, for her part, appreciates the classes more than the award: “I don’t see it so much as an award as it me just being me,” she says.

And for Classie, there are more serious prizes than a plaque at a party: A few months after the Just Food fund-raiser, Five Star received a deed through the Trust for Public Land that ensures the land will remain a community garden for generations to come. The deed was the fruit of over a decade of labor. In 1997, Classie, along with 63 other community gardens, banded together to work with the Trust to ensure their leases wouldn’t be revoked by the city for new construction. Classie spent 12 years setting up the proper bylaws and rules so the Trust would transfer ownership back to the garden directly.

Not that the canning queen is going anywhere anytime soon: “I don’t care how old I get, I’ll always can. I’ll always have a box to grow in,” she laughs, sashaying toward a patch of pinkie-sized okra, nearly ready to boogie their way into a Ball jar. “I get canning recipes in my sleep,” says Classie. “When you love what you do, passion fuels your purpose. And baby, I was born to can.”

To watch Classie in action, go to EdibleManhattan.com.