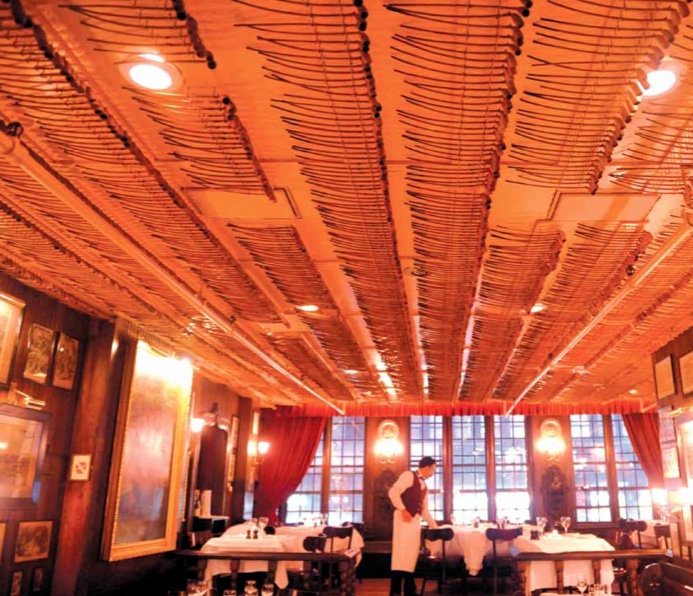 Like a steak on a plate, New York’s history is more complicated than it seems. To the uncurious eye, the steak looks like a slab, a brown plane that’s pink or red inside, and whose whole character can be summed up just as “juicy.”

Likewise, the steakhouse that surrounds it is typically art directed in emulation of one or another ancient meatery. Peter Luger, in Williamsburg, is one such model: dark and mirthful, a stark hall meant to be filled with indulgence and revelry. Keens Steakhouse, on West 36th Street, is another: a beloved idyll of “Old New York” replete with Gilded Age prints and the tobacco pipes of Tammany sachems, which hang overhead by the hundreds as some of the city’s most fastidious diners take their seats among the dark wood walls and white tablecloths to order the mutton chop, a heavy bone-on cut of lamb that is rarely served elsewhere nowadays.

The steak is sinew and muscle and fat and nerve, diverse and mysterious, a cosmos of physiology; and likewise there’s more to the steakhouse than meets the casual eye. Peter Luger is actually a matriarchy, run by three generations of women. And though it opened in 1885, Keens, for all its antique glamour—its mighty “mutton chop,” its prized pipes, its 1905 days of fighting to deny Lillie Langtry admission on account of her sex—is in fact a modern restaurant, lovingly recreated and refitted in the late ’70s by its purchaser, a German-Jewish radiologist named George Schwarz.

“I think I bought it in 1978,” Schwarz reminisces. Nearly a century earlier, the restaurant had been opened by a theater producer named Albert Keen, its upper floors the meeting place for the city branch of London’s literary Lambs Club. It was once the Sardi’s of the now-extinct Herald Square theater district, and directly next to the Garrick Theater. It was said that actors could be seen dashing in, in full makeup, between acts. But by the 1960s, Keens, unlike Peter Luger, had fallen on hard times—its food, like its Herald Square location, in a state of tawdry disrepair.  There was plenty of non-prime “prime rib,” of the kind you might see at the Old Country Buffet. Yet when Schwarz found Keens, while crisscrossing the streets of Manhattan looking for another restaurant to acquire, even that sad steak had disappeared. He peered in to find what was left of the original chophouse covered with auction tags.

The famous “mutton” chop, which likely started out as a powerful, gamey piece of older sheep, of the kind favored in the 19th century, would have already completed its infantilization process by the time Keens closed in 1970s, turning into the English-cut centerloin chop from the much younger lamb we know today. But the 19th century Keens existed during the golden age of meat-eating in New York, a time when mutton and veal were considered two of the five food groups necessary to human health. (Veal was even cheaper than mutton, since calves require less food and real estate than sheep do—and since there were more calves around than room to raise them.)

Originally, Keens’s draw was neither mutton or lamb or beef, but tobacco. The place had begun as a smokers’ club, and its special feature was the thousands of clay churchwarden pipes they kept for their regular customers. (Churchwarden pipes are the long, curved ones favored by hobbits; you’d show your membership card and pipe number, and a Keens staffer would be dispatched to fetch it.) When Schwarz bought the place the pipes were in storage, as forgotten as the terra-cotta army of a buried Chinese warlord. And the decor was nothing like it is today, when every wall has been covered by oil paintings and prints that Schwarz buys at auction.  “Sometimes I see things and think, ‘that would look good on the wall,’ but we have hardly any room left,” he says. Schwarz’s late wife, the artist Kiki Kogelnik, came up with the idea of mounting the pipes on the ceiling. “It was very expensive,” he remembers. “There were a lot of them.” Schwarz, whose family had moved around Europe to avoid the Nazi regime before they eventually emigrated to Brooklyn in the 1940s, spent his days at St. Vincent’s hospital where he was a radiation oncologist, and considered his restaurant business more of a hobby. But Keens began to absorb him; he can often be found there still today, at the age of 79.

Schwarz was no stranger to chic restaurants; he already owned the restaurant called Elephant & Castle and a successful “proto-Odeon” downtown hot spot, One Fifth, where Keith McNally worked his way up from oyster shucker to maitre ’d. (The space is now home to Otto.) His resurrection of Keens was thorough and very expensive; the lowest estimates are over a million dollars in Carter-era money. Such was the verisimilitude of the art direction, though, that even old-time customers wouldn’t notice it. “People would come in and say, ‘You haven’t changed a thing,’” Schwarz recalls with satisfaction.

In fact, Keens is very much a museum of itself and its era, from the Thomas Nast prints on the walls to the idiosyncratic bric-a-brac that fills odd corners of the restaurant. The ancient “Chop House” sign that used to sit above the door is hung from the ceiling, like a famous warplane’s fuselage; a portrait featuring Abraham Lincoln’s head on Ulysses Grant’s stout body has a Schwarz story. Dining room leads to dining room, as you pass right, then left, then upstairs, or back down again, each one slightly different in decor—the Lambs Room, the Lincoln Room, the Lillie Langtry Room, the Bull Moose Room in the spirit of Teddy Roosevelt—and all utterly removed from the present. That these rooms remain alive, still serving (better) versions of their original food, is especially gratifying for those of us with a soft spot for the city’s rude-magnificent past. This isn’t old New York; it’s a poetic idea of it, a parody more poetic than the thing itself.

Consider the mutton chop. We all know it’s not mutton, but so what? Nobody likes mutton in this day and age. It’s rank and tough. But this lamb chop deserves the reverence often, and unjustly, granted to the often-pedestrian porterhouse at Luger’s.  The chop is the full crosscut loin, which is to say a saddle chop. If you cut it in half down the middle you’d have two regular loin chops, the so-called “lamb T-bone” chop that restaurants serve as a cheaper alternative to the tomahawk-shaped rib chop. Those of us who truly love the taste of lamb, especially when browned and crusted and seared, naturally love this cut. Unlike a double-cut chop, or worse yet a lamb rack, almost all the meat is exposed to fire, so one is spared the bland expanse of unseasoned pink interior of those cuts. Because there is more bone, in the center of the meat rather than on its edge, it’s less likely to overcook. And best of all, two long sidelocks of sizzling, salty breast meat extend in each direction, giving the chop the overall shape of a space invader.

Don’t expect the beef to be grassfed or locally raised. It’s bought for one thing—flavor—and on that thing it delivers. Their heavy, deeply marbled steak—real prime beef, increasingly hard to find—is aged in-house in a black-lit iron room, and cut afterward with a bandsaw for kitchen use. Piles of T-bones as thick as dictionaries wait their turn under the 1,000-degree blue flames of the massive steel broilers. (There are a few burners available for the odd piece of fish—which is in fact what Schwarz often orders. But all the action here centers around the broilers, which look like something that would fire a locomotive.) The non-broiled is worthy as well: The creamed spinach is creamy and dense and opulent; the baked potatoes are the size of small footballs. At the bar, a plate of prime rib hash comes with a fried egg on top, and when you wash it down with a dark beer from the tap or sip one of more than 100 Scotches under a nude portrait of a raven-haired beauty Schwarz has named “Miss Keens,” there is a transcendental moment—the moment Schwarz’s heroic efforts have earned, all the more moving for their total invisibility.

Like many others, I love Keens’s mutton chop, and for many years thought of the place as a delivery system for it. But the restaurant, I realize belatedly, is so much more. Its historicity is impeccable, or would be if only you were allowed to actually smoke pipes. You could come here, bask in the meatiness of its steaks and chops, and the seemingly pristine ancient air of the antique rooms.  You should do that. Keens and its polished past, manufactured for the purposes of the present, is George Schwarz’s gift to New York.