The roasted nuts seem humble compared to the finer fares offered by today’s mobile vendors, but their history is as rich as their distinct aroma. 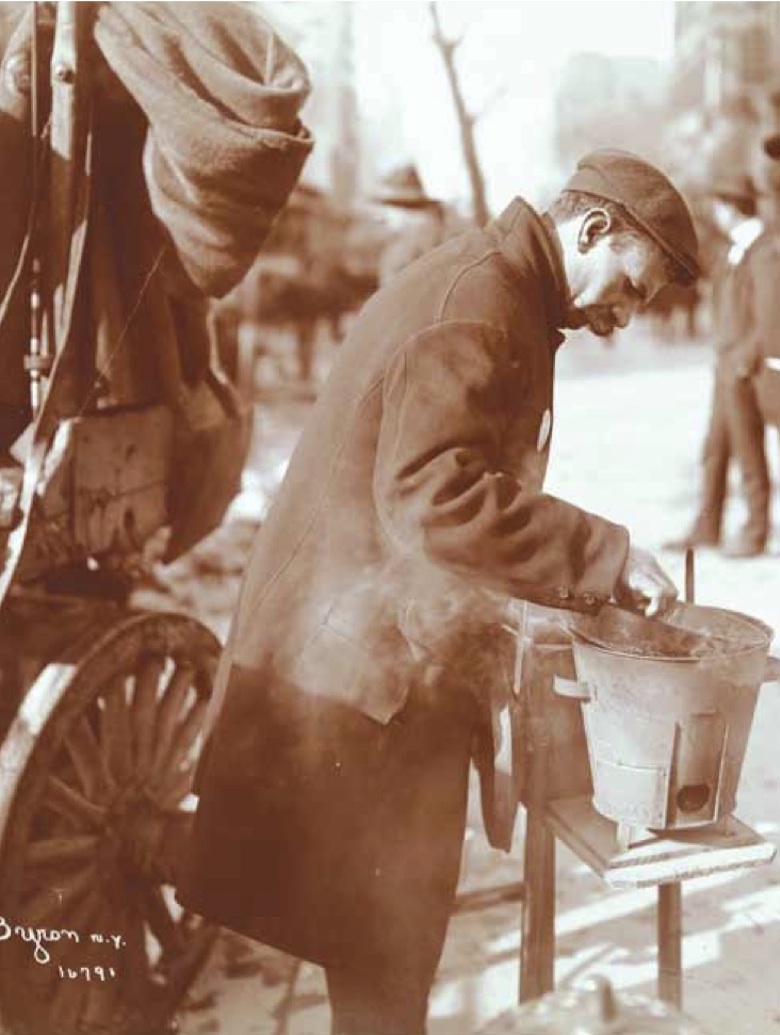 Everyone knows Gotham is in the grips of a gourmet street food craze. But while culinary cognoscenti follow taco trucks on Twitter, they might not realize that one of the most pedigreed sidewalk snacks is right under the nose this time of year: roasted chestnuts. The hot nuts seem humble compared to the finer fares offered by today’s mobile vendors, but their history is as rich as their distinct aroma.

The hardy chestnut contains a starchy flesh associated with winter since well before there were sidewalks on which to peddle them.  For centuries, the towering chestnut was the most ubiquitous tree in eastern North America, accounting for 25 percent of all hardwoods.  It was said that a squirrel could walk the length of the Appalachians, from Georgia to Maine, touching only chestnut branches.

The Northeast was known for its spectacular chestnut harvests, a mainstay for bird, beast and man. Its starchy flesh was a staple of the Lenape diet, eaten like potatoes or beans, and pounded into flour for cakes and bread. The Iroquois enjoyed a beverage made from chestnuts that was similar to coffee, and Colonial settlers also relied on the chestnut for sustenance during the long, cold winters.  Specific associations with the holidays can be traced to 16th-century France and Italy, where desserts like marrons glaces and cake made from chestnut flour remain traditional parts of holiday meals.

The vendor in this photo was a member of NYC’s “pushcart army” of some 25,000 immigrants who kept Gotham sated with snacks from their stands. In winter, roasted chestnuts were a pushcart standby, their toasty shells doubling as handwarmers. But the stand shown here was among the last to sell the North American chestnuts so prized for being sweeter and richer than their European cousins. The introduction of Asian Chestnuts in 1905 brought a blight that wiped out all 4 billion American Chestnut trees.

A few lone specimens still stand around the country—and a handful of blight-resistant crosses were recently planted on Governor’s Island by the American Chestnut Foundation, the National Park Service and the Department of the Interior. In winter, the aroma of roasting chestnuts on city streets is still familiar, but, these days, like so many things associated with Christmas, they’re imported.