Wild fruits are everywhere—if you look. 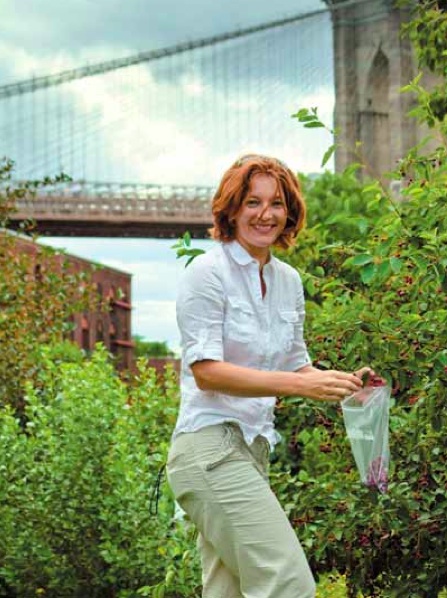 I met the most American of fruit trees one beautiful June day on a Battery Park City terrace.

Friends and I were taking a tour of the Solaire, the first LEED-accredited high-rise in the United States, and a paean of green design whose green roofs look out over the Hudson to the west, to rooftops below and beyond, to the raw construction at Ground Zero, rising in the cleft between two skyscrapers.

Loose-limbed trees were planted on one of the Solaire’s terraces, their supple branches bowed with small red berries that I recognized as the fruit I had eaten in a jasmine-scented garden in the town of Ayvalik, on the Aegean, some summers before. Then, nobody could tell me what they were, only that they were good to eat. On the roof of the Solaire I snuck one into my mouth, and surreptitiously pressed my teeth together. Juice far sweeter than a blueberry’s spread over my tongue. Again and again I edged back toward the trees, upping the dose.

After the tour we found more of the trees on a little promontory in Tear Drop Park, a green inlet in Battery Park, hidden by high-rises. We stood like birds ready to startle, plucking ripe berries and laughing through red mouthfuls. Back home I hit the Web and discovered the genus Amelanchier. My berries had a name, and my New York berrying had begun.

Native to every state, barring Hawaii, these are tough trees and shrubs, capable of surviving brutal winters and blooming in early spring to coincide with the running of the shad, earning them one of their many common names: “shadblow.” They are also called “serviceberries,” their white flowers opening around the time when the ground thaws sufficiently for the first spring burials. Here the berries ripen in late May, and are red and then purple through June, giving them another common name, “juneberries.”

I soon saw the trees everywhere: in Central Park, as an understory in an Upper West Side woodland, on a Tribeca sidewalk, between bridges beside the East River and in the Long Island nurseries I visited to stock the rooftop gardens I design. I started penciling Amelanchier into garden schemes, stocking my Manhattan larder.

At first I ate them fresh, out of hand. The flavor is frankly sweet, without the tart edge of blueberries, and the tiny seeds when crunched release a frisson of cyanide. This almondy essence becomes deeply pronounced when the fruit is cooked: Amelanchier pie is redolent of marzipan. Amelanchier jelly is better than the jam—the clear scarlet preserve free of seeds is a wobbly perfection on white morning rolls.

I mix Calvados and juneberries and macerate the fruit for six months, unstoppering the bottle when early summer seems a preposterous memory. The Norman apples and American berries have mingled as they should: Amelanchier is closely related to the eating apple. In the high-proof alcohol, the fruits’ origins blend so that splashing some dry sparking wine onto a measureful creates a drink that seamlessly melts continents into a buzz in the mouth. I call it a Transatlantic. The berries dry well, too; Native Americans ground them into pemmican.

I had fallen for a berry everyone else ignored, and in my foraging stumbled upon another fruit ripening at the same time, to which most New Yorkers seemed equally oblivious. Despised as a coagulating purple mess underfoot on city sidewalks in June, mulberries are wonderful if picked before they drop, unappreciated as one of the most elusive and fleeting tastes in the berry world. Too delicate to withstand commercial transportation, the berries, each resembling a miniature bunch of grapes, occasionally turn up at farmers markets. But until I spotted a tree of ripe fruit in Central Park I had not tasted the fruit since I was a girl, growing up in Bloemfontein, South Africa, where I’d feasted on them: Perched in the branches of Mrs. Du Toit’s tree in her Paul Roux Street garden, I filled a Pyrex bowl with the purple orbs before bringing them home next door, to be eaten with cream for dessert.

Firm juneberries are easy to collect by the bucket, stripped from their branches, but mulberries squash, bruise and bleed. I drop them softly into small brown paper lunch bags, my red-inked hands giving away my wild-fruit predilection on the subway. Tucked into tiny tarts with a handful of juneberries, the mulberries ooze their amethyst syrup through the warm pastry. They’re gone in a matter of bites but extend their season in the ever-after retelling of their warm succulence. Who says you can never go home again?