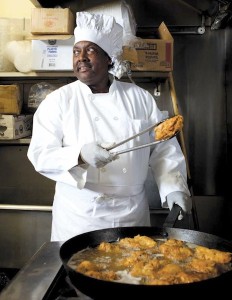 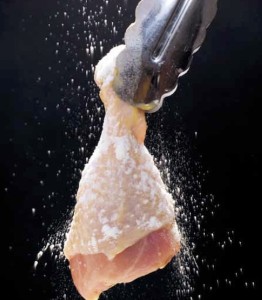 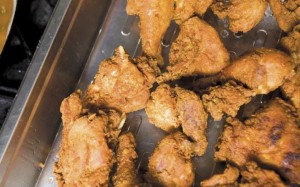 It’s been two years since the New York Times declared “soul food is dying” in New York City, but you wouldn’t know it from the line snaking out the door of Charles’ Country Pan Fried Chicken in Upper Harlem on a recent sunny Saturday.

And to the side of the buffet, displayed front-and-center in the restaurant’s plate-glass window, is the holy grail of fried chicken in New York, as hallowed as Masa’s sushi case: an illuminated self-serve hot box where the thighs, legs and breasts sit, glowing and golden.  When Charles Gabriel, in his starched white chef’s coat, emerges carrying a pan of chicken fresh from the fryer, a wave of cheers ripples down the line as the customers-elderly ladies and their nurses, cops from the precinct down the street and Harlem hipsters in skinny jeans and 59Fifty ballcaps-step aside to let him through.

It’s true that the grand tradition of soul food in New York City, which flourished in the 20th century as more and more African Americans moved here from points south, has taken its lumps in the 21st. The past decade has witnessed the closings-attributed to shifting demographics and changing tastes-of institutions like Copeland’s, M&G, Pan-Pan, Wells and Wilson’s. And Gabriel’s own place suffered a loss: 18 months ago, a stolen car driven by a pack of teenagers crashed through his storefront.

But he reopened in January, and in addition to his own place, he’s got his guest-chef gigs. When the rush at the steam table subsides this afternoon, he’ll hustle down to Rack & Soul at 110th and Broadway, a barbecue and fried chicken restaurant he partnered with in 2006, and where he cooks on Saturday and Sunday nights. And then there are the “Fried Chicken Fridays” at Aretsky’s Patroon, when Gabriel helms the fry pans at the plummy Midtown restaurant, packing in 180 fans on a typical Friday.

Gabriel practices his craft in three outlets in Manhattan now, and guys like us, who grew up in the South and have found ourselves at various times homesick in New York, wonder: How did we get so damn lucky?

The story of how Gabriel came to be New York’s reigning fried chicken king begins in the 1950s, on a farm in Huntersville, North Carolina, where he grew up with 12 brothers and eight sisters.

“We sharecropped,” Gabriel says. “Everyone worked in the fields from six in the morning until six in the evening, picking cotton, growing stuff-collards, cabbage, tomatoes.” The family kept yard birds, hilled sweet potatoes with hay, put up blackberries and strawberries and canned vegetables for the winter. Gabriel was 10 years old when his mother, Nora, first taught him to pan-fry chicken.  When he turned 17, he flew to New York City-he’d never been on a plane before-and went to work for his older brother, Hollis, who had opened a restaurant, Gabriel Fish and Chips, at Columbus and 103rd Street. But he wasn’t ready for the climate.

“It was too cold. I went back home for another two years, and then I came back to New York, and that’s when I settled in.” Hollis had closed his restaurant by then, but the younger Gabriel found a low-rung kitchen job at Copeland’s, on 145th Street in Hamilton Heights. For eight years he washed pots and drove the delivery truck for Calvin Copeland’s soul standby, celebrated among locals and a destination for celebrities like Richard Pryor, until one day a cook didn’t show up for work.

“Copeland put me in the kitchen,” Gabriel remembers. “And in a week’s time, I was cooking the same way he was.”

For 12 years, Gabriel stewed oxtails and smothered pork chops at Copeland’s, but in 1995 he parted ways-“It was a misunderstanding about salary,” he says, “I’d been cooking eight years with no raise”-to go into business for himself. His new venue was rather more modest: a folding table on Amsterdam Avenue, between 151st and 152nd Streets, near the third floor walk-up he shared with his wife, Geraldine, in a brownstone nearby. In his apartment kitchen, he would fry chicken and cook pulled pork and hot dogs, then haul it all in chafing dishes to his table on the street. He soon earned a reputation in the neighborhood, and, within a few months, a customer offered him the means to step up his game.

“One day a lady asked, ‘What are you going to do when it gets cold?'” Gabriel recalls, cracking up at the memory. “Actually I hadn’t thought about that.” The woman owned a licensed food truck, a Dodge in need of some work, and she told him if he fixed it up he could rent-it-to-own for $50 a week. Gabriel accepted her offer, and Charles’ Mobile Soul Food Truck hit the streets.

“I’d cook all night, and load my truck up in the morning,” Gabriel says. “I set up a time frame: I’d start at 11 a.m., come down to the HPD office on 132nd, then the welfare center on 135th, then the post office on 137th. I gave everybody 30 minutes, and I moved on to the next place. After the post office, around 1 p.m., I’d go to all the barbershops-Lenox, 116th, Seventh Avenue-until 6 o’clock.” He soon moved the cooking operation out of his apartment and into a narrow space on St. Nicholas Avenue, near 125th, but it would be several years before he leased the current location on Frederick Douglass Boulevard and changed the name of the operation, dropping the phrase “Soul Food.”

“Being I’m a Southerner, I thought: Let me just change it around, call the place ‘Charles’ Southern-Style Kitchen,'” he says.  “Southern food-it’s the way I came up down South. I season my chicken, let it sit-marinate-before I use it. I don’t use no deep fryer. Pan-fry only. I season my vegetables. A lot of people just throw stuff together. I don’t do it that way. I have to take my time, and do it the right way.”

That connection to Southern tradition isn’t lost on his regulars, like jazz vocalist Gregory Generet, who stumbled upon Charles’ when he moved to Sugar Hill 15 years ago. Generet grew up in Brooklyn but spent summers and holidays with his mother’s family in Johnsonville, South Carolina, among aunts and grandmothers who would gather in the kitchen to fry chickens that were always freshly killed.  “There’s very few people whose fried chicken I eat,” says Generet, “The thing about Charles is he uses the same approach my mother used: the flavor, the texture, the crispness, the moistness, the exact amount of salt and pepper, the method of cooking it in a cast-iron pan seasoned with 25 years of use. Fried chicken is tricky, and Charles is consistent.”

Soon after Gabriel hung his shingle out on Frederick Douglass, Eric Asimov of the New York Times wrote the first review of the place: “If you ever wondered what makes soul food so soulful, I offer Charles’ Southern-Style Kitchen in Harlem as a perfect opportunity to find out.” Asimov called Gabriel “an artist,” and wrote, “This is food you don’t think about so much as feel.”

Asimov’s was but the first in a torrent of raves over the years, but as many times as Gabriel has been called “genius,” “artist,” “master,” he’s quick to divert attention away from himself, and to focus on his process and the results.

Gabriel is generous with the details of the technique, which calls for sprinkling the meat with a dry-spice mixture at three points in the process: dry-curing the raw thighs, legs and breasts for eight hours with the mixture, whisking it into the milky eggwash, and finally tossing it with the flour the chicken gets dredged in before meeting its destiny in the pan. (The only trade secret he keeps is the ingredients of his spice mixture.)

And he’s adamant about pan-frying-so much so that when he reopened the Frederick Douglass Boulevard location in January, he rechristened the place “Charles’ Country Pan Fried Chicken.”

“Deep-frying smothers the chicken, makes it taste greasy,” he says, a statement leagues of cooks partial to the deep-fry basket might dispute. What is indisputable is Gabriel’s chicken: the crisp, almost shattering crackliness of its skin, especially, and the moist, brothy quality of its meat.

“Fried chicken ain’t hard,” Gabriel tells us. “You just got to know when to turn it.”

Later in the afternoon, when the line out the door has thinned a bit, Chantee Green, who resides in Lower Harlem, walks in with her mother and sister, and announces: “I ain’t wasting no time, I want some fried chicken with some of that gravy.”

Green tells us her family’s been eating Gabriel’s food since the days of the Soul Food Truck, and that when he parked it for good, they followed him.

“I travel Uptown to get this food because I love it, because it tastes homemade,” Green declares. “The other places-they using boxes and cans. Charles’ is made from fresh, real ingredients, and he actually cooks the food-you always see him here. And he remembers you!”

There are few restaurateurs who would devote as much time to their establishments, and that may be the key to his success in the current climate. We ask Gabriel how he’s still thriving, with so many soul food restaurants disappearing from the Harlem landscape, and he doesn’t hesitate for a moment before answering.

“I don’t give up that easy,” he replies. “I been doing this all my life, whether I’m making money or not. A lot of people are in it for the profit, but I’m not in it for that. As long as I can pay my bills, I work seven days a week, 18 hours a day, and it don’t bother me.”