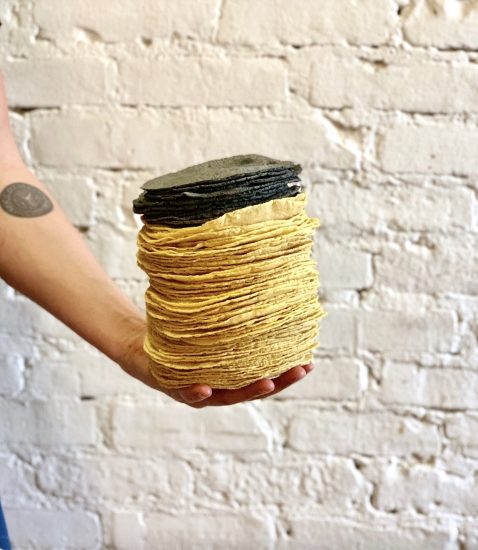 Image courtesy of For All Things Good. 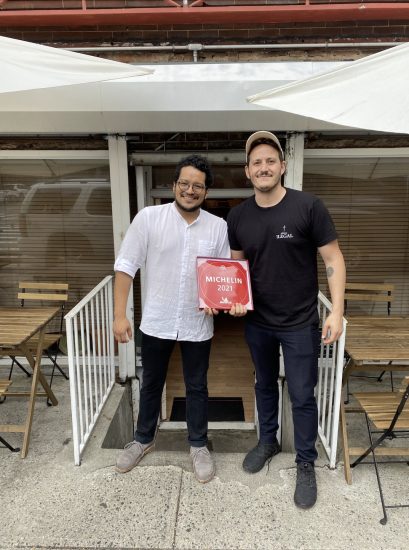 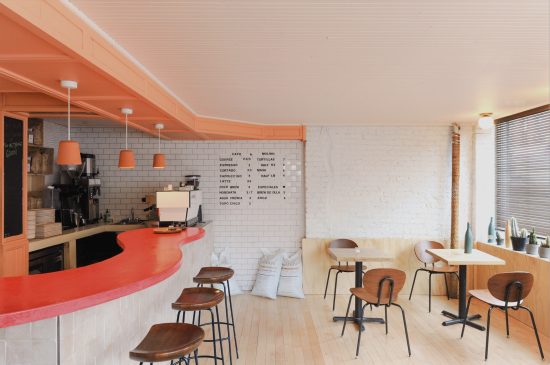 FOR ALL THINGS GOOD

If you’re going to make fresh masa, the dough that is fundamental to Mexican cuisine, then you’ll need time and a mill. And if you need a mill, you’ll need space and some corn. But, if your goal is to launch New York City’s first neighborhood molino (the Spanish term for mill), For All Things Good, you’d better just be obsessed.

That’s just as well. Self-taught masa aficionados Matt Diaz and Carlos Macias, respectively a wine expert and an architect by trade, know what it takes to turn an idea into an experience verging on a movement. The starting premise seemed simple: “Find a good tortilla,” says Diaz. But the outcome of that mission—a sublime mouthful of red-pink heirloom corn for Macias and a 10-year culinary adventure for Diaz—soon led to experimenting with nixtamalization.

A way to make maize more digestible and nutritious, nixtamal is the name traditionally given to kernels that have been cooked in a slaked lime solution before being steeped in that solution and washed. Then, nixtamalized kernels can be ground into soft masa or used as hominy in soups and stews.

Initially a passion project for Diaz, who met Macias—based in Mexico until 2020—while studying in Argentina, the magic of nixtamalization quickly escalated into an obsession. The more Diaz learned about the subtleties of corn flavor, texture, and color that reveal themselves through nixtamalization, the more he felt compelled to share the results. If he could reconnect people to “an 8,000-year-old culinary tradition that also happens to be on the brink of extinction” because of the popularization of commercial shortcuts, he says, then all the better.

Diaz makes the next steps seem effortless, despite the risks. Start by pouring your life savings into a space fit for an urban molino, a sunny corner close to the Pratt Institute on thriving Franklin Avenue. Next, do your research. Find equipment small and powerful enough to fit into a city-sized kitchen, in this case, from LA-based masa hub Masienda. Then, persuade a friend—Macias—to make an international move to bring a combined dream to life. Finally, be bold enough to launch in the heat, humidity, and high stakes of a  pandemic summer.

Since then, the two friends have been working around the clock to make the destination a commercial success. Their small, open kitchen—staffed by a team entirely new to the milling process— runs like a well-oiled masa-machine. But while hungry guests can enjoy a colorful assortment of fresh tortillas, tlayuditas, tetelas, memelas, quesadillas, tacos, and tlacoyos seven days a week, Diaz and Macias are keen to stress this is a molino-restaurant, not the other way around.

The space currently produces 60 pounds of heirloom masa a day, though it and the molino’s fresh tortillas sell out fast. An ever-changing selection of corn—yellow, blue, and red varieties sourced for contrasting texture and flavor- comes from a small network of heirloom farmers across Mexico. Some of those farms still adhere to the traditional milpa system of growing nitrogen- fixing crops, like beans, together with moisture- retentive, weed-inhibiting ground cover plants like squash to support a target crop, maize. That creates a regenerative cycle, beneficial to the land and farmer alike.

Their message may be getting through: Look for a second For All Good Things in Williamsburg soon. 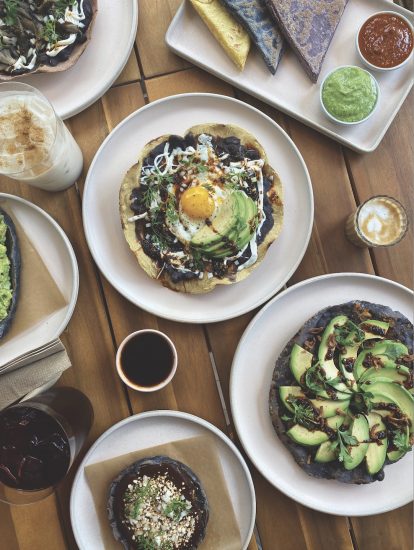 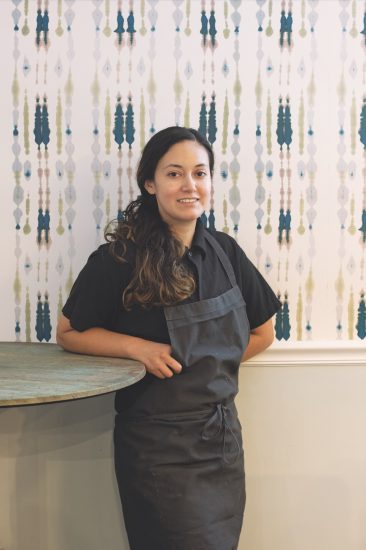 Masa Master.
(Above) Chef Emily Gonzalez, lately of Cosme and Blue Hill at Stone Barns. (Below) At La Casa, slaked corn is fed into a Masienda “Molinito.” Images courtesy of La Casa Bronxville. 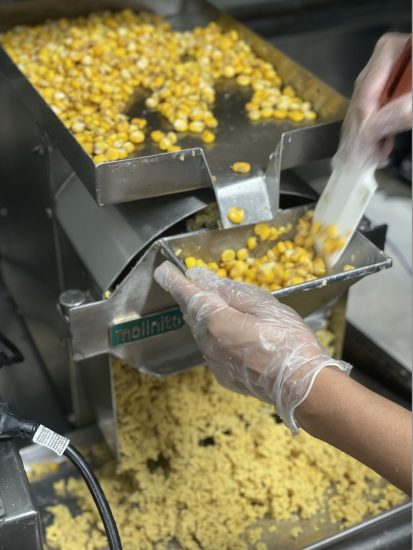 When Emily Gonzalez decided to become a chef, becoming a masa expert wasn’t part of the plan. But in her new role as head chef at La Casa Bronxville—currently the only Westchester restaurant nixtamalizing in-house—that’s exactly what she’s become.

Despite “watching [her] mom make regular flour tortillas,” and drawing on flavorful Mexican-Guatemalan culinary heritage in her cuisine, the alumna of Cosme and Blue Hill at Stone Barns was new to making fresh masa. It wasn’t until she had the opportunity to help owner Spencer Pingel launch his Bronxville food venture that Gonzalez became a masa queen, as restaurant manager Ronald Rufino puts it.

From selecting the right milling equipment for preparing and grinding corn to working with masa specialists and grain farmers across Mexico, it’s been an education. The result is an ode to Mexican milpa philosophy and gastronomic tradition paired with Hudson Valley’s seasonal produce, inspired by Chef Gonzalez’s weekly trips to Union Square Greenmarket and local farms including Norwich Meadows Farms. 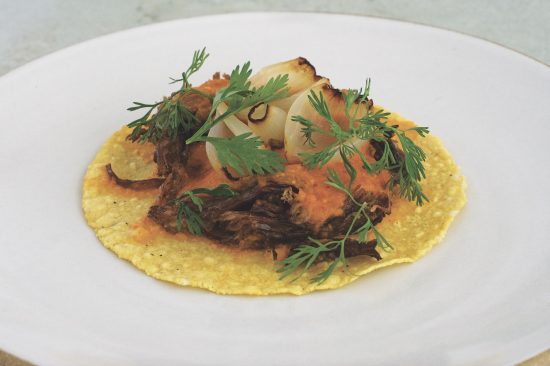 Devilish Details.
La Casa’s tortillas are pressed from house nixtamalized corn and much of its produce is seasonal and locally farm sourced.

Much the same goes for Rufino, who went from advising La Casa’s budding team (a pandemic work pivot) to running the restaurant while tending to its wine program. With a world-class resume spanning stints at Blue Hill and beyond, Rufino credits his decision to a “transcendent tasting” of Gonzalez’s lobster tostada: “The skies opened up … it was like the opening credits of ‘The Simpsons’ … that’s when my intention to work at the restaurant really solidified.”

As for the cuisine, that tostada also owes a debt of gratitude to Masienda. For starters, Masienda helped to bolster the chef’s knowledge of nixtamalization and introduced her to seasonal heirloom corn. Yellow corn, for example—her current favorite— imbues masa with a strong savory quality. White corn, less so. But the flavors of both varieties, along with blue corn, elevate a humble grain and its potential on the plate. No longer merely the springboard for delicious dishes, it’s the star of the show.

About time, too. When it comes to masa, Rufino attributes a general lack of awareness among diners to the current state of the masa making tradition and its context. It’s not accessible … yet. “Much like most bakers don’t mill their own flour, most cooks in the New York region don’t have access to, or know much about, the masa milling process.”

The upshot is to showcase masa’s true potential, and to support heirloom farmers in the process. The upshot for La Casa Bronxville’s guests is a fine-dining experience that’s accessible to everyone.

Just before this issue went to print, we learned that Chef Emily Gonzalez is no longer with La Casa and the restaurant is no longer nixtamalizing in house.

For All Things Good