Skip the Store—Gift Your Own Infused Booze

These are light-lift infusion projects perfect for easy bottling and sharing. 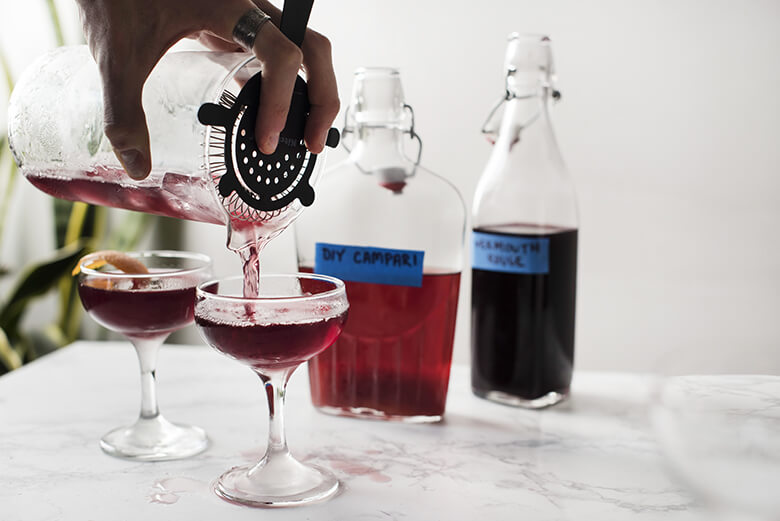 Making vermouth and Campari at home doesn’t require a distillation system. The alcohol itself is absorbing the flavors of whatever’s added, whether that’s through a few days of soaking or a light application of heat.

For every housewarming in 2016, I gifted the proud new homeowner with cheap wine.

I should say, I gifted cheap infused wine I called “vermouth,” after the flavorful wine you drink with soda in Spain or use to add the final panache to a cocktail. And I think you ought to share infused booze as a gift, too.

Vermouth has been flavored with a dizzying array of botanicals, from the warm flavors of baking spices like cinnamon to the punch of wormwood, a bitter herb that’s the key flavor in absinthe and crucial in vermouth production. After the wine is flavored, it’s fortified with a spirit (grappa, sherry, or in our case, brandy) and sugar. These add-ons keep it fresher for far longer than an opened bottle of chardonnay, making infused alcohol a great gift for someone who wants to build out their home bar.

Campari, an Italian aperitif, is also an infusion of a high-proof spirit, with a red color that’s practically trademarked, along with a laundry list of ingredients. Its flavor complements gin, it’s easy to make yourself, and yes, it’s also a great gift.

All of this is to say, making vermouth and Campari at home doesn’t require a distillation system. You don’t need to be a winemaker. Hell, you don’t even have to buy anything expensive.

These are light-lift infusion projects, where the alcohol itself is absorbing the flavors of whatever’s added, whether that’s through a few days of soaking (like the Campari) or a light application of heat (like the vermouth). 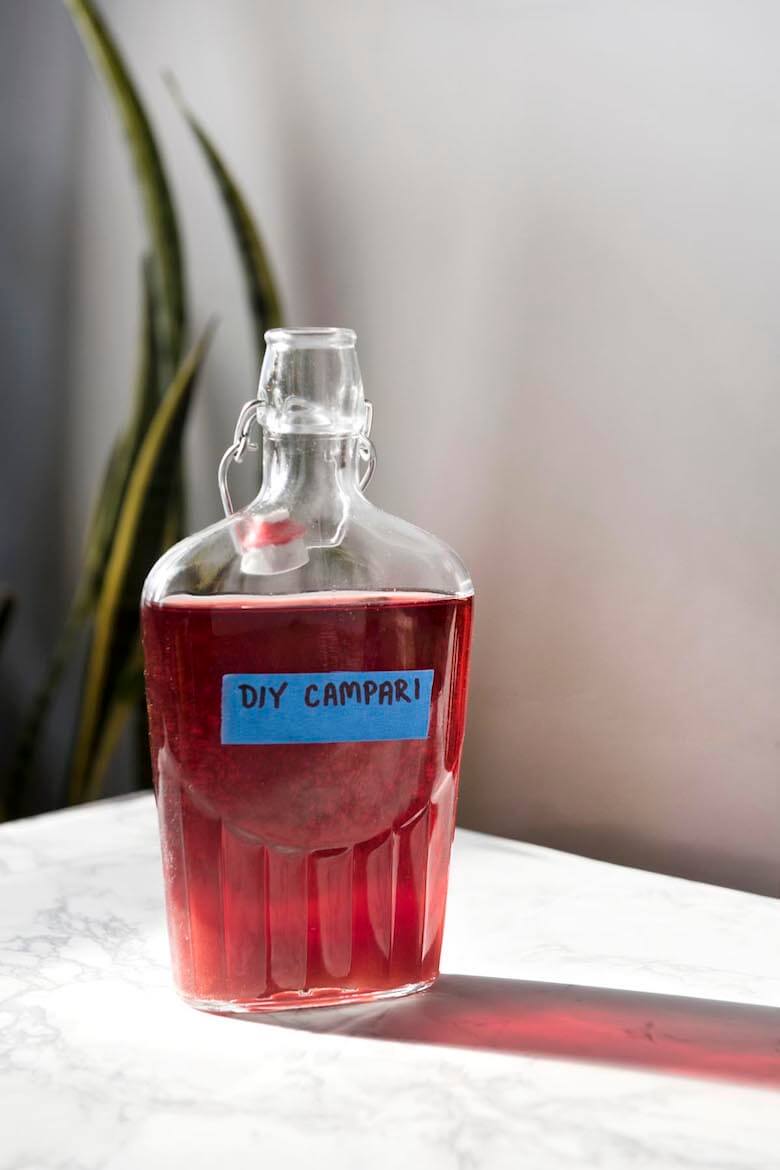 Italian aperitif Campari is an infusion of a high-proof spirit with a laundry list of ingredients.

This recipe is based off of the ill-reputed college beverage wherein fruit soaks in vodka for a group punch (and dreadful hangover). Maybe you called it “Jungle Juice.” Maybe it was called “Purple Jesus.” Call it “homemade Campari,” though, and suddenly it’s an elevated concoction worthy of gifting.

Though commercial Campari has over 30 ingredients and a recipe that only the owner supposedly knows, with a trip to the produce market and a cheap bottle of vodka, you can get pretty damn close to the real thing, with no trips to Italy or keg stands required.

In a large pitcher, add sliced grapefruit and oranges, blackberries and cherries. Pour vodka over. Place in refrigerator to let flavors meld, about 72 hours. Strain into a bottle and add simple syrup. Keep refrigerated. 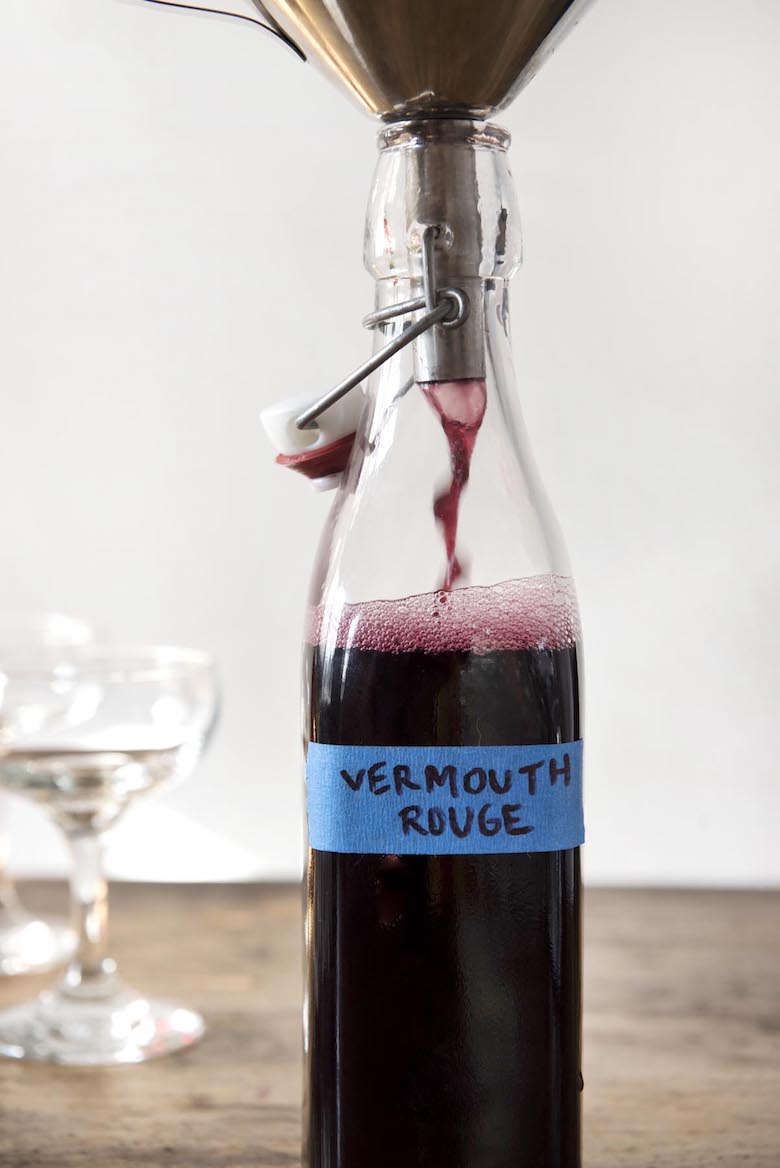 Vermouth has been flavored with a dizzying array of botanicals then fortified with a spirit and sugar.

You’re making a wine tea here, so it’s not necessary to spend a lot on the wine. Though the bitter roots add an essential part to the vermouth, it’s very easy for them to dominate. This recipe can be adjusted to your own taste, from the quantity of the aromatics to the sweetness in the simple syrup.

The brandy simple syrup adds fortification, body and sweetness to what is otherwise a VERY bitter mulled wine. Finally a word of caution: The sugar cooking in brandy gets quite hot, and depending on your range top’s controls, the flame can get bigger while you’re cutting off the heat, creating a blast of heat and a flambé show. So be sure to remove its pan from the flame before turning off the heat. And, yes, I learned that the hard way.

Make the Vermouth Base:
Combine wormwood, gentian, thyme, sage, angelica root, black peppercorns, lemon zest and star anise on cheesecloth and tie it together to make a bundle that the smaller pieces won’t fall out of.

In a large stockpot, add cheesecloth bundle, cinnamon, vanilla bean, orange peels, lemon peels and wine. Bring to a simmer, then remove from heat. Pour into a container and chill overnight before straining into bottle.

Make the Brandy Simple Syrup:
In a small saucepan, combine brandy and sugar. Bring to a simmer and stir to dissolve sugar. Remove from heat, then cut off flame. Let cool. 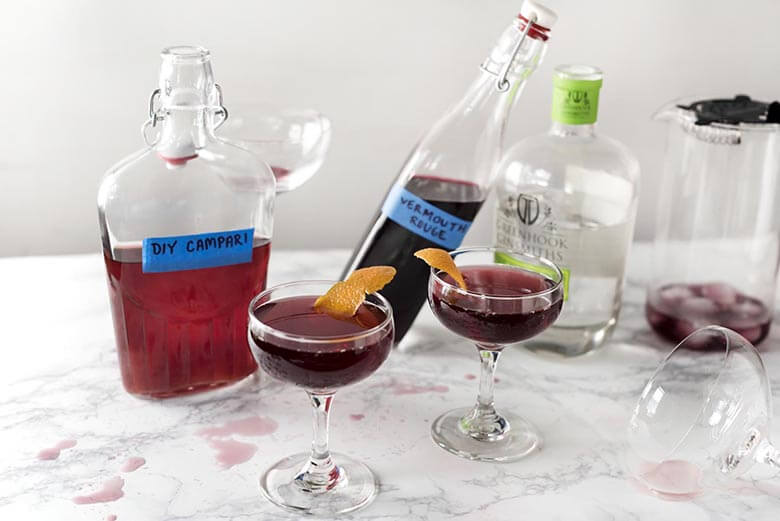 This negroni keeps the classic bitter/sweet/boozy characteristic of the drink, with a more fruit-forward flavor and a sensual purple color.

In a mixing glass filled with ice, combine vermouth, Campari and gin. With a long cocktail spoon, stir until chilled, about 30 times. Strain into a coupe glass and express orange peel over the drink to release oils. Garnish with peel.