Working directly with networks of local foragers from Italy, France, Croatia and Spain, they seek out the best of the best, bringing in fourteen tons of truffles annually 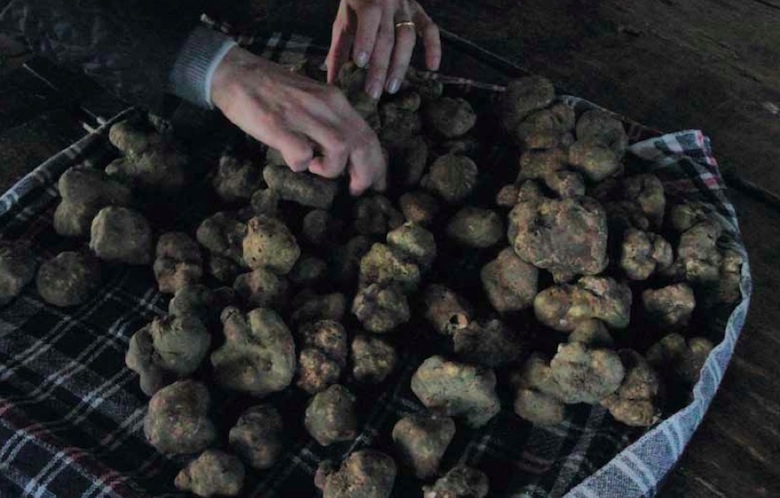 MONTECASTRILLI, ITALY—I’ll admit that until I came here last November—to the lushly wooded foothills of central Italy, a picturesque patchwork of medieval villages sunk into the green, green Umbrian mountains—I wasn’t much of a truffle fiend. Far from it: If you’d asked me if I liked the fungi (they’re the edible offshoot of underground mushrooms), I’d most likely shrug, offering some snarky comment about how they’re currently overplayed on everything from $30 hamburgers to pretentious mac and cheese.

But that jaded notion disappeared forever in my first hour in this breathtaking Umbrian town, which I visited during the peak of the white-winter-truffle season, set by law to run from early October to December’s end. It didn’t hurt that my hosts were truffle royalty, the Umbrian clan behind the multinational truffle-trading company called Sabatino Tartufi. (In Italian, tartufi is plural for truffle.)

Launched in 1911 by Sabatino Balestra, the family-owned operation started as a tiny shop selling Umbrian truffles, olive oil, olives and sardines to Montecastrillians. “The business started right there,” Sabatino’s son, Piero, tells me via translator, pointing downhill to the old stone streets of the city market where his father, who has since passed, began buying and selling exactly 100 years ago. Now in his 70s, Piero himself has retired. Today Sabatino Tartufi is largely run by four of his five children: Giuseppina, Marina, Gabriel and Federico—the last of whom arrived in Manhattan in 1999 at the age of 23, looking to expand the family business to the States with the help of a few pounds of the goods in a refrigerated case and a list of great restaurants.

Just 12 years later, the company is the largest broker and exporter of fresh truffles to our country: Working directly with networks of local foragers from Italy, France, Croatia and Spain, they seek out the best of the best, bringing in 14 tons of truffles annually to top American chefs like Daniel Boulud, Jonathan Benno, Michael White and Fortunato Nicotra, the Italian-born cook behind the kitchens at Felidia. One of Sabatino’s first customers, Nicotra has been buying from the family for over a decade, ever since Federico came to his kitchen, he recalls, “with a suitcase full of truffles.”

In Manhattan, most top chefs typically source truffles from a handful of purveyors, buying only after they’ve seen the product in person after the goods are brought to their door. (Preferably still smudged with soil, says Chef White: “The film of dirt protects them.”) These days fungi arrive from three or four dedicated truffle companies such as Sabatino or, more often, from larger spe- cialty food distributors like D’Artagnan and Baldor, who show off their tartufi along with their latest heritage breed birds or Chilean olive oils. Baldor, in fact, just partnered with Sabatino to formally distribute their truffle products along the East Coast.

In fact both Nicotra and White have made the pilgrimage to see Sabatino Balestra’s truffled family turf, the still-agricultural exurbs of the tiny village of Montecastrilli. The heart of the business is their 200-year-old country home, the archetype of an ancestral Umbrian villa: It sits high up on a hilltop like an earthen-walled fortress, surrounded by row after row of grapevines tinted flame-red in fall; thickets of purple-tipped sage plants; and the gray-green heads of the family’s own olive trees. Perhaps more important is what’s just a few more miles out: those forested hillsides where the most prized of fungi live in symbiotic harmony underground among the roots of ancient oak and chestnut trees.

Finding them isn’t easy, and as you would expect, truffle hunters are secretive about their spots—like mushrooms, truffle spores stick around, and thus the fruiting bodies tend to appear in the same spot each year. Foragers even go so far as to hide the evidence that they’ve dug, Marina, the youngest daughter (and official family translator), tells me, so the competition doesn’t stumble upon the site and set out to scoop them the next year. Truffle hunters don’t want contracts or paperwork, she says: “There is nothing written down.” Still, a pair of long-standing truffle hunters—Cristina and Francesco, who help run a local consortium dedicated to the local industry—will show the curious who contact them how it’s done.

A truffle hunter’s two most important tools—other than total recall of what lies beneath acres of craggy, wooded slopes—are the vanghetto, a lovely long-handled knife used to dig up the tubers from tree roots, and even more importantly, their dogs. Pigs, which have been used to hunt truffles since the 15th century, were finally passed over for trained pups decades ago. Unlike those other intelligent sniffers, dogs don’t eat the product. Walking the shrubby hillsides, hunters and their four-legged partners are in constant movement and constant conversation: The dogs loop around, seemingly sniffing wildly; when they bark at a find, the hunters plunge their vanghetto through the layers of decaying leaves and ground cover into the deep dark soil. More often than not, they come up empty-handed.

Amazingly enough, the Balestras have never really been foragers themselves. Instead they leave the treasure hunt to a mixed crew of hard-core seekers and part-time hobbyists like the 20-something Davide, an off-duty caribinieri (or cop) who, like other hunters this time of year, comes directly to the Balestras with his haul. He shows up at the back door of the kitchen in the early morning dressed in Gore-Tex and flannel, offering his finds in a pretty plaid bundle— the real baby Jesus for the holiday gastronome. Even several feet away, it’s redolent with woodsy umami, what Chef White terms the truffle’s perfume.

It’s “pungent and indescribable,” he raves, “a smell that identifies nothing else but truffles.”
Davide’s stash weighs in at three kilograms—about 6.5 pounds— of tartufo bianco, or of winter whites, the best of which will fetch $350 per ounce back in New York. Not for nothing did the 18th-century gastro-writer Brillat-Savarin call them the diamond of the kitchen.

Such prices have enabled Sabatino Tartufi to open four satellite offices in the States since they arrived in 1999—Los Angeles, Las Vegas, San Francisco and Boston, the last of which was launched by middle son Gabriel in April—in addition to the manufacturing facility Federico runs in the Bronx, where the company now makes all of its super- high-end truffle-infused oils, pastas, flours and butters once the product arrives in the States. (Sabatino sells both black-winter and milder black- summer truffles in addition to their more pungent white cousins.)

While Federico and Gabriel are charged with introducing their product to ever more chefs in Manhattan, back in Montecastrilli, Piero’s oldest daughter, Guiseppina, has been the one responsible for buying them for the past 15 years, just as her grandfather did. Working quickly, fingers moving deliberately and gently, she sorts Davide’s little bundle of truffles by size and smoothness, checking for weight-to-size ratio (a lighter truffle might have worms) and red veins from tree roots that might push up its price, or a whiter, sought-after pale-green tint that appears around the time of the new moon.

Perfectly round truffles make it easier and more cost- effective for chefs to shave uniform slices over risotto during the dinner rush, Nicotra tells me, but even so it’s usually those veined, knobby, gnarled masses that American chefs drag out to the dining room to show off to guests—evidence that what you are about to eat lived literally gripped by the trees that give it life.

And last, but certainly not least, are the tiny little nubbins that would have been better left in the ground for next year, often tossed into the bundle that gets delivered to Guiseppina’s practiced fingertips in the hopes of a higher payout. “They are too small for chefs,” Guiseppina jokes as her mother gently cleans them for dinner. “We keep those for ourselves.”

What’s even more stunning than the view from Balestras’ villa, in fact, is their ability to cook everyday food with such a rare culinary luxury. Most Umbrians can buy the delicacy less expen- sively than we can, but to this clan the fungi can still function as plain old mountain food. On their long wooden kitchen table the truffle—the essence of must and earth, plucked from the soil—is just another forest food among the boar and venison and pheasant and rabbit, the aged sheep’s milk cheeses and cured sausages, the mushrooms and walnuts and chestnuts. (The latter Marina toasts for me each night over an ancient fireplace in her family’s parlor).

In this kitchen, Piero’s wife, Laura, can shave a whole little fellow over the fat orange yolk of a fried egg for breakfast as if it were black pepper. By afternoon a tablespoon or three will be crushed with olive oil and slathered on thick toasted wedges of yesterday’s loaf for a snack. But the real proof comes at dinner, just after she puts on a pot of water for fresh fettuccine. She gathers up nearly a pound of tiny little bumpy truffles and, with help from Giuseppina, puts the lot through an old-fashioned meat grinder, adding only a splash of pasta water and knob of butter to yield a pure truffle pesto that would cost me at least $3,000 to make in the States. Tossed with that warm pasta and served in wide bowls before a dozen of us at that long wooden dining table, this is the truffle at its most simple—and to me, its most seductive, too.