Liquor, Liquor Everywhere— But Not Allowed to Drink. 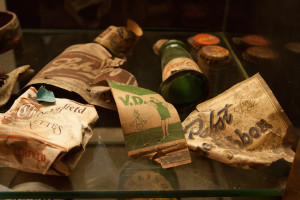 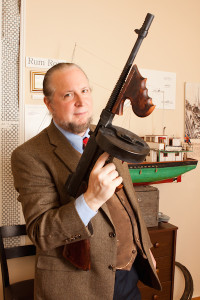 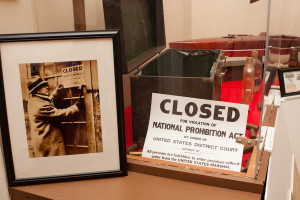 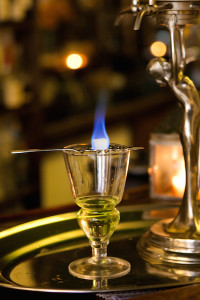 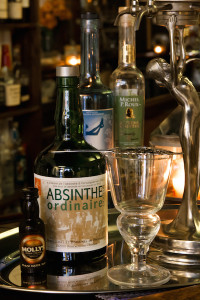 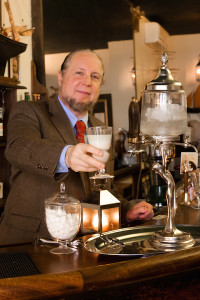 The moment Prohibition went into effect—midnight, January 16, 1920—was marked with surprisingly little notice in Manhattan. “john barleycorn died peacefully at the toll of 12,” was the headline of the New York Times the next day. A few restaurants set their tables with black cloths as a gesture of mourning, while some bars and nightclubs held “wet” funeral ceremonies. But for the most part, as that Times reported, “Instead of passing from us in violent paroxysms, the demon rum lay down to a peaceful, though lamented by some, death.”

While the Volstead Act made it illegal to produce, import or consume alcoholic beverages on U.S. soil, customers continued to partake of the forbidden substance. It’s likely that the reason John Barleycorn died peacefully was because he didn’t die at all: Manhattan was legally considered a “dry” town now, but in reality, there was no shortage of alcohol. Imbibers just found new ways to get it.

One of the primary routes that brought alcohol into the city from “Rum Row,” the Eastern seaboard where alcohol was smuggled from Canada to Maryland, was initiated off the far shores of Long Island. Some fishermen, seeing an opportunity to make much more money than they could catching finned creatures, turned their vessels into rum-running boats. Under the new law, it was legal to transport liquor as long as you maintained a three-mile (eventually extended to 12-mile) distance from the coast, but many an enterprising Long Island-based whaler took on the task of sneaking spirits from passing ships to shore, where it was more valuable than whale oil.

Because of their expertise, most boatmen could outmaneuver and outrun any Coast Guard officer. Once on land, the cases of contraband were transported to Manhattan via trucks or cars with hidden compartments. One Rail Express worker told of delivering a large box of oysters to an address in Manhattan and receiving an unusually generous tip, a reward for smuggling (unbeknownst to him) an illegal shipment of Champagne. As gangsters and pirates entered the effort, rum running became much more dangerous. Even so, industrious opportunists saw an opportunity to make money. Moonshine or bootleg spirits, illegally distilled in dubious domestic stills, often tasted awful and could be toxic or even lethal. So British citizens purchased cases of rum from the West Indies and the Caribbean, and whiskey from Canada and Europe. The phrase “Real McCoy” reportedly originated because a man named Bill McCoy delivered high-quality, unadulterated liquor to thirsty citizens.

There were several sources of “Real McCoy” in Manhattan, including this ingenious strategy to distribute Bacardi, which celebrates its 150th birthday this year. In 1916, Bacardi had established a rum bottling plant on West Broadway. But according to William Ramos, a Bacardi historian and brand ambassador, when Prohibition took effect a staggering 60,000 cases of rum were left on the warehouse shelves—for which Bacardi had no legal market. Rather than lose all that prized inventory, Bacardi creatively sold shares in the bottling plant. When the assets were liquidated, the shares were literally liquid: each equaled one case of rum. Thus, in the early 1920s, you could still find authentic top-shelf Bacardi (illegally bought from “shareholders”) at Jack and Charley’s on 52nd Street, and the Red Head in Greenwich Village.

While Prohibition was engineered to end America’s alcohol consumption, it had some unintended effects. “Instead of stigmatizing the drinking of alcohol, Prohibition actually made it more respectable,” wrote Wayne Curtis in And a Bottle of Rum: A History of the World in Ten Cocktails. In the first months following the booze ban, headstrong Manhattanites continued to drink openly in public establishments—as many 21st-century smokers would initially flout Mayor Bloomberg’s cigarette ban in city bars. But the government stepped up efforts to enforce the law and hired undercover agents—like Izzy Einstein, a postal clerk, and his partner, Moe Smith. To collect evidence, Einstein secreted a small glass funnel in his jacket pocket, connected to a bottle in the lining of his coat. Another ploy was to ask the too-obvious-to-be-believed question: “Would you like to sell a pint of whiskey to a deserving Prohibition agent?” Einstein’s techniques included a roster of disguises: He wore
fishing gear on Long Island; in Manhattan he played sidekick to Moe’s rich out-of-town businessman, announcing in a loud voice that he was looking for something decent to drink. A gullible waiter, they hoped, would direct them to a speakeasy.

But not every official was as diligent as Izzy Einstein. Rather, enforcement officials themselves were perhaps the greatest boon to booze trade: Many police were in on the action or simply turned a blind eye, particularly to their own favorite watering holes such as McSorley’s in the East Village.

While the so-called Noble Experiment was intended to “86” America’s alcohol, by many reports access only increased, albeit to unregulated libations. Prohibition was ultimately declared a failed experiment and on December 5, 1933, after some partial measures, the ban was completely abolished with the ratification of the 21st Amendment. Across New York, and across America, citizens raised a glass to Repeal, and to the resurrection of John Barleycorn, who’d been alive all along.

At 80 St. Mark’s Place, which housed a Prohibition-era speak- easy, Lorcan Otway operates the Museum of the American Gangster and the recently restored William Barnacle bar. The museum displays such artifacts as a moonshine still, archival news articles and song sheets about illicit drink. Back in the day, customers entered through a butcher shop; wiring was con- nected to explosives in case the Feds came knocking. Modern visitors can don hard hats and visit the smuggling tunnel, or just have a drink—offerings include Rheingold beer (empty bottles from the twenties were found in the basement) and cocktails made with absinthe, another liquor that is forbidden no more.

At 80 St. Mark’s Place, which housed a Prohibition-era speakeasy, Lorcan Otway operates the Museum of the American Gangster and the recently restored William Barnacle bar. The museum displays such artifacts as a moonshine still, archival news articles and song sheets about illicit drink. Back in the day, customers entered through a butcher shop; wiring was connected to explosives in case the Feds came knocking. Modern visitors can don hard hats and visit the smuggling tunnel, or just have a drink- offerings include Rheingold beer (empty bottles from the twenties were found in the basement) and cocktals made with absinthe, another liquor that is forbidden no more. Photo credit: Vicky Wasik