Looking for a gift for your favorite eater-meets-bookworm? Consult our roundup featuring additional titles that didn’t run in our print issue. 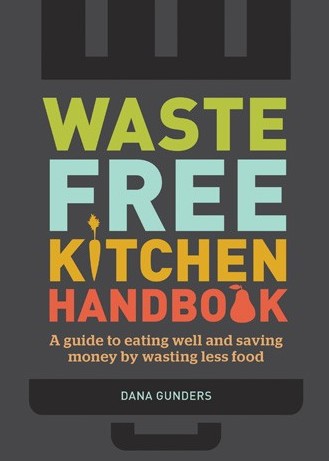 Waste-Free Kitchen Handbook: A Guide to Eating Well and Saving Money by Wasting Less Food
Dana Gunders
$19, Chronicle Books (Sept. 2015)
Reducing food waste is the hottest of topics right now, and for good reason: Roughly a third of all food produced for human consumption — approximately 1.3 billion tons — goes to waste every year. This thoughtful new guidebook aims to help you be part of the solution. Written by Dana Gunders of the National Resources Defense Council (NRDC), a tireless and infinitely knowledgeable food waste activist, Waste-Free Kitchen Handbook gives an array of simple recipes and handy tips to prevent you from tossing perfectly good food into your wastebin. Change starts at home! 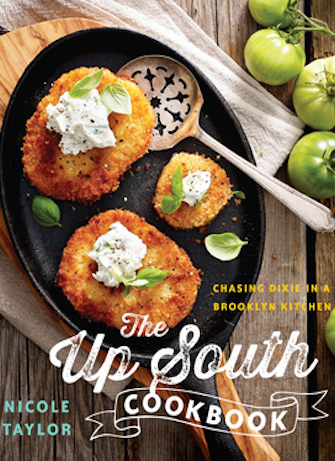 The Up South Cookbook: Chasing Dixie in a Brooklyn Kitchen
Nicole Taylor
$27, Countryman Press (Oct. 2015)
Up South is exactly as promised: an exploration of Southern cuisine, as filtered through the prism of modern Brooklyn cuisine. This book resonated particularly with us — many Edible Brooklyn staffers are from the South — but you don’t need Dixie roots to appreciate these fresh recipes from chef Nicole Taylor, a Georgia-to-Brooklyn transplant. Think: Pimento cheese meets crème fraîche, deviled eggs meet smoked trout (from a Jewish deli, naturally). 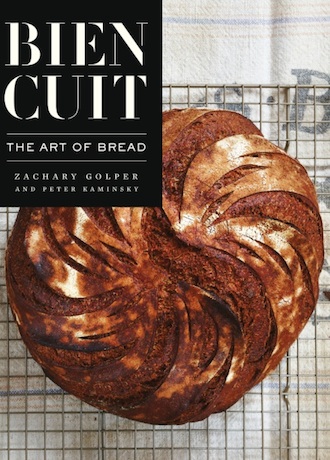 Bien Cuit: The Art of Bread
Zachary Golper
$50, Regan Arts (Nov. 2015)
Zachary Golper is one of the world’s most renowned bakers; his Brooklyn bakery puts out loaves that make bread enthusiasts go weak in the knees. With this, his brand-new cookbook, Golper peels back the curtain on his technique of fermenting the dough for a long time at a low temperature. With a little practice, you’ll be making your own dark-hued loaves, the envy of every dinner party. 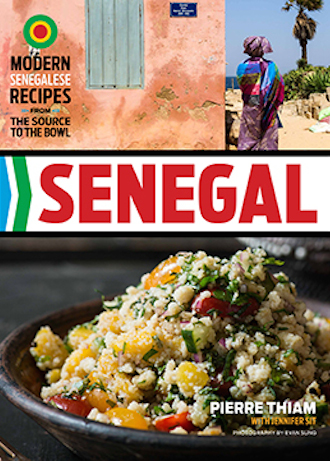 Senegal: Modern Senegalese Recipes from the Source to the Bowl
Pierre Thiam
$35, Lake Isle Press (Sept. 2015)
For many New Yorkers, chef Pierre Thiam is the face of Senegalese food. His melding of West African cuisine with contemporary upscale dining is without rival; Thiam’s acolytes are numerous. Now, with his newest cookbook, you can transport your own kitchen to faraway lands, with Thiam as your gentle, patient instructor. This book also gives a generous amount of historical and cultural context; this is not cuisine in a vacuum. 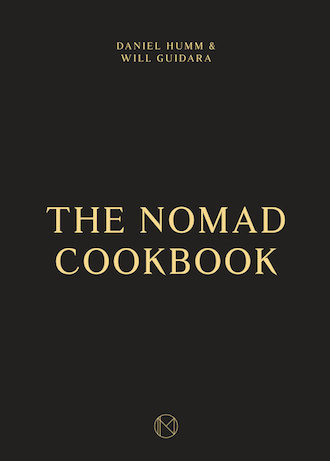 The NoMad Cookbook
Daniel Humm, William Guidara and Leo Robitschek
$100, Ten-Speed Press (Oct. 2015)
Chef Daniel Humm certainly needs no introduction. As the man behind three-Michelin-starred Eleven Madison Park, he is an outsized presence in the city and beyond. Along with his partners Will Guidara and Leo Robitschek, Humm just put out The NoMad Cookbook, a long-anticipated, beautiful, New York–centric tome. Each copy comes with a bonus — The NoMad Cocktail Book, written by drinks wizard Robitschek. 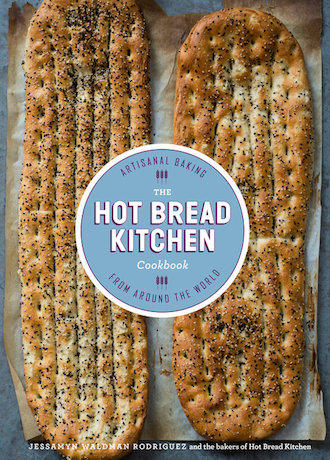 The Hot Bread Kitchen Cookbook: Artisanal Baking from Around the World
Jessamyn Waldman Rodriguez and the bakers of Hot Bread Kitchen with Julia Turshen
$35, Clarkson Potter (Oct. 2015)
Jessamyn Waldman Rodriguez, founder and CEO of Hot Bread Kitchen (HBK), launched the bakery-meets-workforce-training-facility in 2007 as a social enterprise with a couple of missions. First, she wanted to empower immigrant women by parlaying their baking skills into jobs. Second, she wanted to establish a top-notch bakery “with an emphasis on regional specialties you can’t find everywhere.” Nearly a decade later, HBK’s diverse and talented team turns out tortillas, rolls, filled doughs, leavened and unleavened breads and more for retail outlets across the city. Meet the women behind these world-class breads and hone your global bread knowledge with this book. 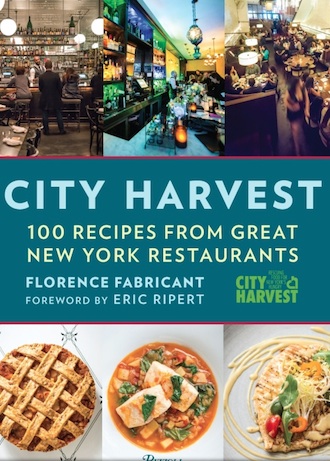 City Harvest: 100 Recipes from Great New York Restaurants
Florence Fabricant
$40, Rizzoli (Sept. 2015)
You’ve likely seen City Harvest trucks throughout the city; they’re responsible for retrieving roughly 150,000 pounds of food each day to be distributed among several hundred soup kitchens and food pantries across the city. Since it was founded in 1982, the organization has rescued more than 500 million pounds of food and counts some of the city’s best restaurants as key supporters. New York Times writer Florence Fabricant sheds a light on some of these local institutions by curating and appropriating 100 of their recipes for home cooks. Fitting for the cause, each recipe includes a “second helping,” or a creative tip on how to use the leftovers. 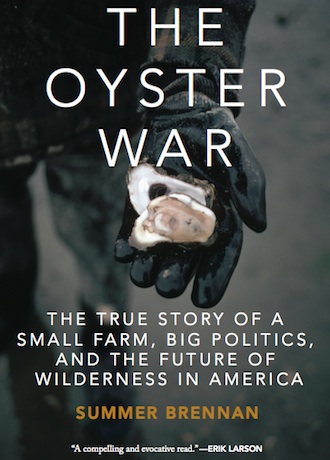 The Oyster War: The True Story of a Small Farm, Big Politics, and the Future of Wilderness in America
Summer Brennan
$18.95, Counterpoint (Aug. 2015)
One of two non-cookbooks on our list, The Oyster War chronicles the trials and tribulations of oyster farming in California’s Drakes Estero estuary. Brooklynite author Summer Brennan grew up nearby and later found herself in the midst of a passionate and divisive dispute between oyster farmers, environmentalists, national politicians, scientists and the Department of the Interior while working as the sole staff reporter for local newspaper, The Point Reyes Light. Her vivid and personal account of the ongoing dispute as to whether a decades-old oyster farm should vacate the estuary raises questions about our collective understanding, definition and regulation of wilderness. 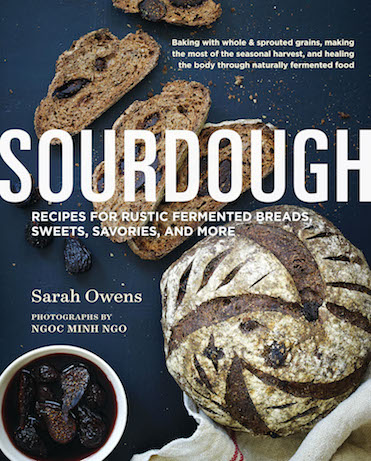 Sourdough: Recipes for Rustic Fermented Breads, Sweets, Savories, and More
Sarah Owens
$35, Roost Books (Nov. 2015)
When a professional gardener turns her full attention to baking, the odds are good that her recipes will keep alive her ties to the soil. Brooklynite Sarah Owens’s new book weaves together many biographical and botanical threads, creating in the process a series of recipes that follows closely the turning of the year. Expect impeccable loaves flavored with roast beets, sweet potatoes, butternut, figs and smoked chilies alongside lesser-known sourdough goods, including biscuits and cookies. 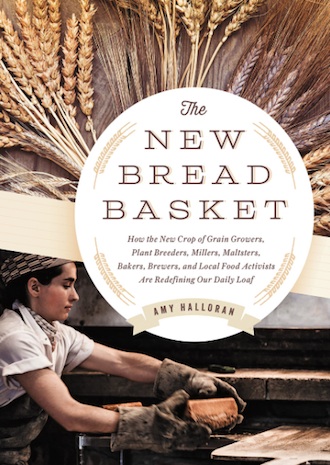 The New Bread Basket: How the New Crop of Grain Growers, Plant Breeders, Millers, Maltsters, Bakers, Brewers, and Local Food Activists Are Redefining Our Daily Loaf
Amy Halloran
$17.95, Chelsea Green Publishing (July 2015)
If you read our magazines frequently, then you know that there’s a grain revival brewing across the country. Troy, NY, resident Amy Halloran has followed its rise and shares her observations by introducing readers to burgeoning grain projects involving farming, milling, baking, brewing and malting. From the first malthouse in New England in more than 100 years to systems that are pioneering regional feed, food and alcohol production in the Pacific Northwest, Halloran’s new book gets on the ground with the movers and shakers revitalizing our local grain supply. 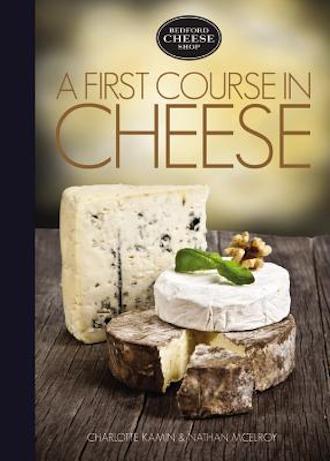 A First Course in Cheese
Charlotte Kamin and Nathan McElroy
$30, Race Point Publishing (Oct. 2015)
Bedford Cheese Shop’s opening helped educate a generation of New York gourmands on the cheese basics. Their new book does the same but for a much wider audience that’s not lucky enough to regularly consult face-to-face with their staff. This photo-rich book serves the basics from milk animal breeds and seasons of feed and flavor to how to break down big wheels and a condensed cheese encyclopedia. Like their counter, it also lists iconic American cheeses alongside their European peers. Ideal for new cheese enthusiasts who are seeking to deepen their knowledge. 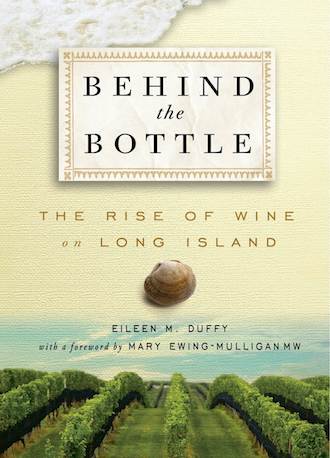 Behind the Bottle: The Rise of Wine on Long Island
Eileen M. Duffy
$19.95, Cider Mill Press (Apr. 2015)
Food and wine writer Eileen M. Duffy has been on the beat on Long Island’s East End since 2003. After starting out as the editor of community weeklies The Traveler Watchman and The Suffolk Times, she is now the editor of Edible East End and Edible Long Island magazines as well as the editor of their websites: edibleeastend.com and ediblelongisland.com. In 2009, Duffy completed a wine credential, the Level 4 Diploma from the London-based Wine Spirit Education Trust, which requires two years of study, blind tastings, papers and tests. For the book, she interviewed local winemakers and asked them to pick a bottle of wine they made they felt was a milestone for either them or the region. The result is a fascinating account, informed by Duffy’s decade of involvement with the region, of the personalities and the vintages that made Long Island Wine Country what it is today: a producer of world-class wine. 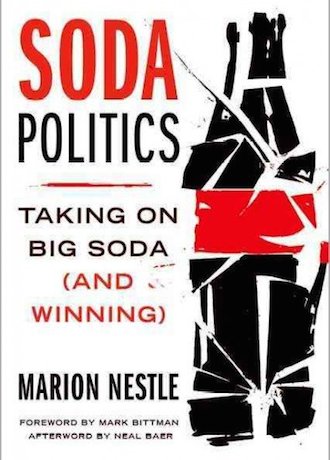 Soda Politics: Taking on Big Soda (and Winning)
Marion Nestle
$30, Oxford University Press (Oct. 2015)
Food politics guru Marion Nestle focuses her gaze on big soda in her latest book. She lays out how this multibillion-dollar industry has normalized excessive soda consumption, completely altering the landscape of public health and healthcare costs. Drawing on examples from New York City to Berkeley to Mexico, she encourages readers to participate in finding the solution to this epidemic. 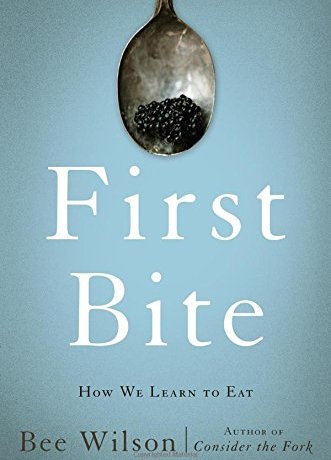 First Bite: How We Learn to Eat
Bee Wilson
$27.99, Basic Books (Dec. 2015)
Eating healthfully isn’t in our nature; we have to learn to choose greens over Twinkies and water over soda. Psychologists, neuroscientists and nutritionists around the world have studied these learned habits for decades, and in her most recent book, author Bee Wilson examines their research to understand how family, culture, memory, gender, hunger and love determine how and what we eat. While she presents many complicated challenges in changing our engrained lifestyles, Wilson ultimately shows that, even as adults, there’s hopeful potential for individuals to adopt healthy eating routines.