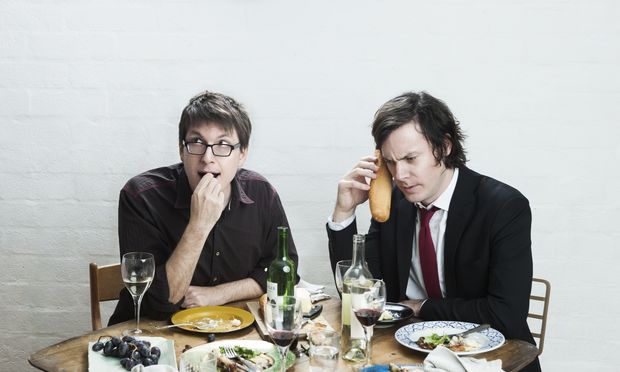 According to the organizers:

Join hosts Brendan and Rico along with very special guests Jessica Williams (“The Daily Show”), legendary talk-show host Dick Cavett and musical guest Emmy the Great for a party to end all parties.

About the Hosts
Brendan Francis Newnam has been winning dinner parties since first taking a seat at the kid’s table at his family’s holiday gatherings. Granted, by then he was in his 20s and had graduated from Rutgers while the rest of his tablemates were toddlers, but a victory is a victory, even if you make a five-year-old cry. After living la dolce vita in Europe and fighting for prosecutorial reform in Bulgaria, Brendan was seduced by public radio’s siren call. @BFNewnam
Rico Gagliano has loved dinner parties since childhood, when he got to eat in his parents’ bedroom and watch TV all night while the grownups got wine-tipsy. Rico has contributed to All Things Considered, Weekend America, Marketplace and more. Rico co-created, performed and wrote for The Ministry of Unknown Science, a comedy troupe for which he’s dropped his pants and stood way too close to an exploding sex doll. @RicoGagliano “
+ Google Calendar+ iCal Export