Despite what a recently appointed “taco editor” has said. 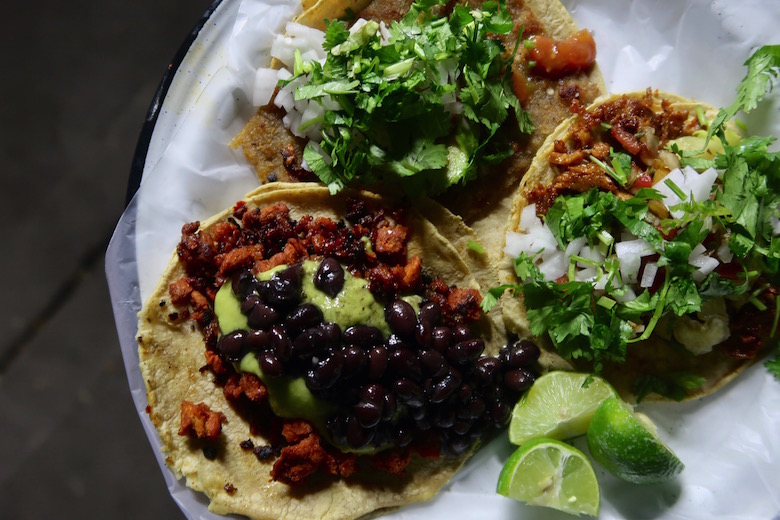 These are tacos. Specifically, tacos from Por Siempre Vegana Taqueria in CDMX. Photo by the author.

I came into the world crying my tiny lungs out in Tijuana, B.C., Mexico, at a hospital called Notre Dame. For most of my childhood, before moving to el otro lado—across the border—we lived in a pastel pink house built on a hill. Our street was marked by its corner neighborhood taco stand, cleverly named Tacomiendo, a play on words meaning “they’re eating.” There, my brother and I would huddle around the teal-colored tile to gorge ourselves in taco-eating competitions, stuffing ourselves with carne asada and adobada.

Tacos are traditionally eaten standing up and, by design, demand the eater cock their head. They fare poorly in travel, making them best to be enjoyed in the moment and hot off the comal, Spanish for griddle. The word taco is a Spanish translation of the Nahuatl word tlahco, meaning half or middle. It’s a dish that has deep roots in our country, stemming back to the ancient Aztecs who first nixtamalized corn and, with it, created the unleavened round flatbreads we know as tortillas.

Tacos are a way of life in Mexico. They’re eaten for breakfast, lunch, dinner and, most notoriously, late-late dinner after a night of caguamas and tequila. And like viewers learned on Netflix’s Taco Chronicles, everyone vows their loyalty to particular stands, even regions, forging a friendly yet never-ending rivalry over whose are best. Tacos are tacos.

Burritos, on the other hand, are something else entirely, and entered my life while crossing the busiest border in the world, from Tijuana, B.C. to San Diego, California. There, vendors of all kinds braid themselves through the seemingly endless parade of cars waiting hours on end to cross, selling everything from handmade trinkets, to puppies, nieve de garrafa to, of course, burritos. Unlike the giant adaptation popularized in the ’60s in the Mission District in San Francisco—comprised namely of meat, rice, and beans and served with salsas—the border burritos are thin, flour-tortilla wrapped snacks most commonly filled with refried beans and queso fresco, or potato with chorizo. They’re rolled for convenience, making them excellent for travel. My friend’s mom, an exquisite cook, would pack them for us on long road trips or visits to the beach. Burritos are a take-away product, able to withstand a longer amount of time before being eaten—something the legendary Juan Méndez, who is said to be responsible for the creation of burritos, realized himself. During the Mexican revolution, he would cross the Rio Grande to sell hot food, and kept his fillings warm by tucking and rolling them in a large flour tortilla that resembled the packs carried on donkeys, where the dish got its name, burrito: It is a byproduct of border life.

For centuries, people have been eating tacos and burritos in peace, appreciating their distinctions. That is, until José R. Ralat, who is originally from Puerto Rico and is the newly appointed taco editor for Texas Monthly, made the disparaging claim that burritos are tacos in a recent interview with The New Yorker. This assertion disregards Mexico’s culture and its history for those who live in Mexico, as well as those who are at its fringe in border towns. Doing so dismisses a people’s identity through food. Not every dish can be synthesized to one singular thing. It’s lazy. Every dish has its own history, identity, unique tradition and strong sentiment for those who enjoy it. Reducing a burrito to a type of taco is an unnecessary and overly simplistic way of diminishing both histories and traditions.

Ralat makes a secondary, potentially more derogatory, claim, saying that because tortillas are served with every meal, it makes every dish in the cuisine a taco, boiling down Mexico’s entire culinary landscape to a single dish. But we don’t eat tamales, sopes, tortas or ceviche with a side of corn tortillas. There’s a time, place and dish for them.

“I’ll be covering Mexican pizza, and Mexican burgers, paletas, burritos—I’m a little scared of those, to be honest,” Ralat said. “I don’t know what that’s gonna be like. But I consider burritos to be tacos.”

And because the new Texan authority on Mexican food is scared to try them, he doesn’t even know how to describe them. He says they’re folded. No, quesadillas are folded. Tacos are folded. Burritos are tucked and rolled. There is a difference, and that difference is supreme.