“Discover the Power of Rye!” reads the bread’s package label, and we can’t help but wonder if there is more than meets the eye to this rustic, modest loaf. 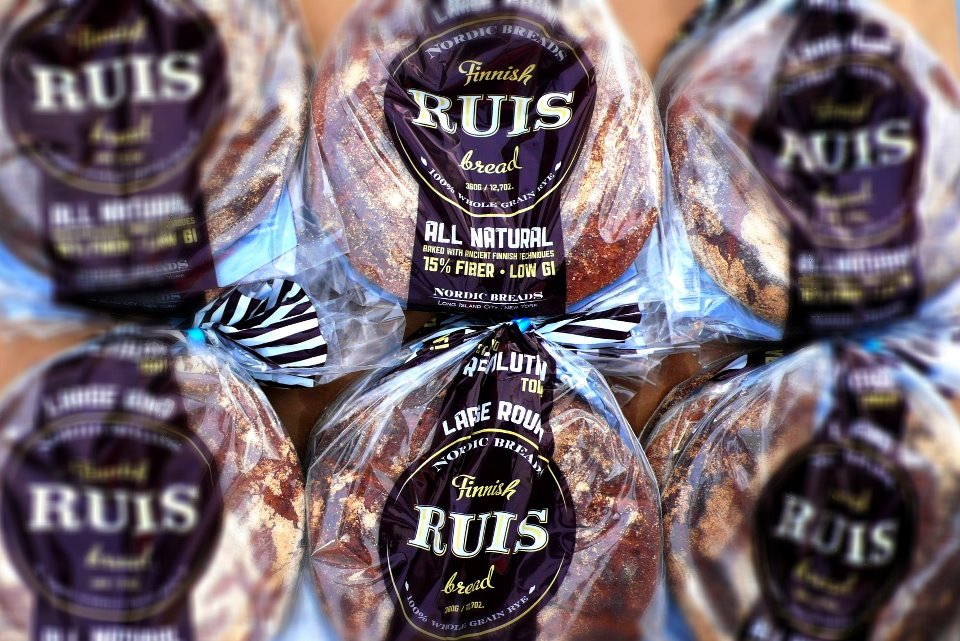 By looks alone, Nordic Breads’ Finnish Ruis (whole-grain rye bread) is completely innocuous. Round and flat, like a large compact disc or giant flattened bagel, it exhibits a deep russet coloring and flour-dusted finish. You can find Ruis piled in teetering stacks at the Union Square Greenmarket, neatly parceled at Whole Foods or tucked into the breadbasket of Boulud. “Discover the Power of Rye!” reads the bread’s package label, and we can’t help but wonder if there is more than meets the eye to this rustic, modest loaf.

Our inkling would be correct. A deeply rooted history, vibrant folklore and pure, gritty taste are wholly concealed inside the rye’s constituents.

Rye’s ability to thrive under poor soil conditions and cold temperatures has long made it a staple of the Scandinavian diet. Coupled with the sustainable, nutritious qualities of Ruis (it boasts 100 percent whole grain, four times the soluble fiber of wheat and low-gluten content), the bread’s livelihood can actually be traced back all the way to the Stone Age, ergo Nordic Bread’s ancient Finnish folklore adage, “Ruis puts power in the wrists.”

From grain to grocery, Nordic Breads’ Finnish Ruis is truly an unfeigned labor of love. To master the art of fermented rye, founder Simo Kuusisto traveled to rural Finland and apprenticed its craft. To grow the Finnish rye locally, Simo transported the seeds to the Finger Lakes region of New York, where they thrive organically. And to authentically rise the Ruis, he uses a sourdough leavener called juuri that has been preserved, fed and reused by Finnish bakers over dozens of generations.

Grainy and complex like an extremely hoppy beer, the loaf is dense, wholesome and slightly sour. Its rustic disposition and hearty confidence are proof that Simo has truly succeeded in re-creating this Nordic heirloom on new turf. And his next project, a malted rye, will be just as deeply entrenched in Scandinavian heritage as the Ruis.

The malted rye will be darker in color with a sweet, complex flavor profile; think ambrosial and festive for the winter months. Like all of Simo’s culinary endeavors, the malted is steeped in tradition, garnering inspiration from his favorite Finnish dessert, a rich malted-rye pudding served with heavy cream. In Finland, the malting process (or imellyttäminen) is common in traditional winter holiday dishes, bequeathed from a time when sugar was a winter scarcity, making malting the only way to sweeten foods.

Today, malting is strongly associated with beer brewing. But the potential to produce flavor intricacies and unrefined sweetening upon baking lends an attractive option for bread bakers as well. By far, the most commonly malted grain is barley, but rye malt is becoming increasingly popular to brew — and if Simo has anything to do with it; to bake bread, too.

So, what exactly is malting? In short, malting is the biochemical reaction of converting starches into sugar. Three key steps, each with specific temperature, moisture and time requirements, ensure a successful malt.

The malting process is fundamentally the same for all grains, but rye requires specific modifications to accommodate its delicate nature. A thin bran layer increases rye’s absorbency, mandating less water and faster steeping and kilning time than barley. (If over-steeped, the rye becomes mushy and inhibits germination.) Lack of a protective outer layer also increases its susceptibility to breakage during germination. It may be for these reasons that Simo has yet to find a malted rye in the United States akin to the kind he likes in Finland.

Ideally, Simo would like to bake his bread with malted rye syrup, dried malted rye grain that is cooked down until it forms a thick liquid. An unrefined sweetener, malt syrup is digested slowly; gentle on blood sugar levels. While searching for the perfect malt, Simo’s malted rye bread will remain a work in progress — but always, a labor of love; this one especially sweet.