The Edible editors are celebrating their mamas this week. Check out some of their favorite New York businesses that also love their mamas and grandmamas. 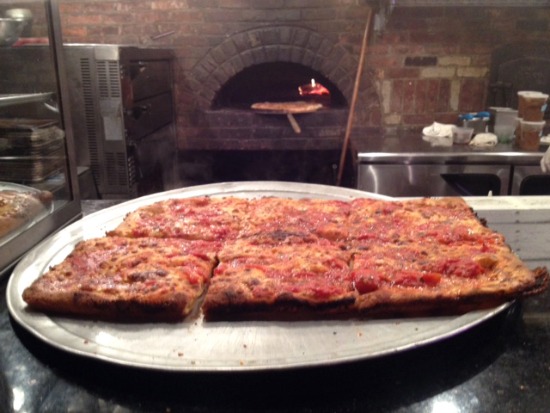 The Edible editors are celebrating their mamas this week. Check out some of their favorite New York businesses, below, that also love their mamas and grandmamas (and then learn a little about the editors and their mothers in our Mother Ode: A Toast to Our Moms.

P.S. It’s not too late to pick up something sweet for Mother’s Day! We’ve got lots of ideas for the food-and-drink-loving mom.

Marissa Finn: MamaSushi
MamaSushi in Inwood is the only sushi place I know of that stuffs their rice and seaweed with Dominican specialties like sweet plantains, tamarind sauce and Chimi burger. I’ve been dying to go for months, and the one time I had a noon lunch date planned, I found out the hard way that they don’t open until 1:00 — not that I would have gotten a table anyway.

Amy Zavatto: Enoteca Maria
In Staten Island, the most misunderstood borough of the five, there sits one of my favorite restaurants in all the land. Now, the name doesn’t quite fill this bill, but stick with me because the idea does. Enoteca Maria was named for Joe Scaravella’s grandma, whose lovely photo you will see sitting inside this slender, ever-packed spot just uphill from the ferry in the neighborhood of St. George. But the concept is unlike anything I’ve ever seen: Each night of the week, a different nonna (that’s an Italian grandma for all you non-paesanos out there — which, really, is the ultimate of mamas) cooks the food of her region in Italy. One night might be Marche; the next, Abruzzo; the one after that, Emilia-Romagna, and so on. And the menu is as fearless as its owner — capuzella (traditional half a sheep’s head stuffed with rosemary-flecked garlicky breadcrumbs) and tomatoey trippa sit alongside less challenging meals like little sausage-dotted discs of orecchiette and tender braised rabbit. In season, Scaravella nabs some of the ingredients from the NYC greenmarket that sits across the street on Saturdays, as well as his own biodynamic micro-farm that he cultivated nearby. What it all sums to is a lively, fun spot (often with Scaravella’s hard-rock iPod soundtrack in the background, which I’m pretty sure his own nonna would not have approved of, but I definitely dig) and an ever-varied menu complemented by a kick-ass wine list full of oddball little grape varietals that the owner seeks out in the same way he cultivated his apron-clad nonna-centric staff: With a loving, careful eye.

Carrington Morris: Best Pizza’s “Grandma slice”
Williamsburg favorite Best Pizza’s Grandma slice dishes out a homeyness that goes right to the spot. Local rocker Nick Palmirotto of Hull describes the corner slice as “particularly comforting.” A zippy tomato sauce sings with overtones of anchovy, while the wood-fired brick oven crust is crunchy, chewy and then yielding in all the right places. Warming the heart, just like Grandma.