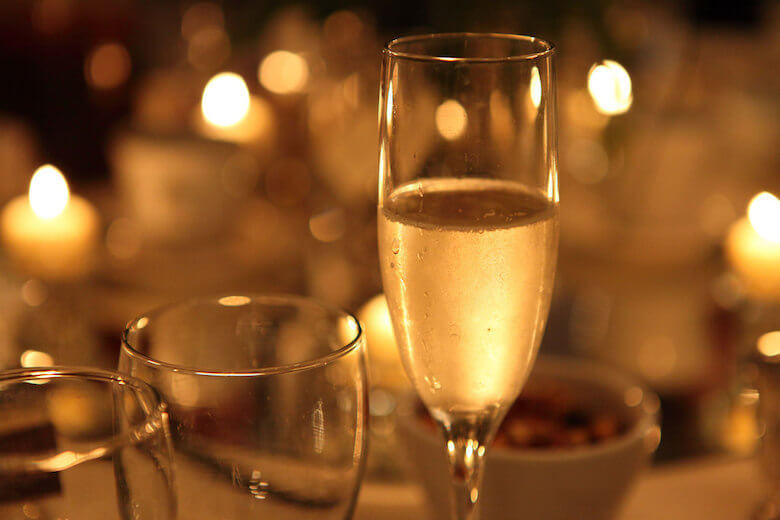 Drink up the bubbly at these New Year’s Even parties. Photo credit: Flickr/Sam Howzit

Manhattan is known for many things, great parties being one of them. And New Year’s Eve is obviously no exception––there must be something in the air this year in particular, because the events lineup is seriously impressive. From a celebration of 100 years of Art Deco at Le District to endless Dom Pérignon at the Four Seasons, these are the places to eat and drink nice things in between bouts of dancing and (ideally) hydrating.

Over-the-Top NYE Bash at Ty Bar’s Dom Pérignon & LOUIS XIII Lounge
If you’re looking to kick 2020 off with a bang, this is just the thing for you. Ty Bar at the Four Seasons Hotel New York (the flagship location in Midtown) is teaming up with Dom Pérignon and Louis XIII to throw an unforgettable evening of fine sipping, caviar, a live stream of the ball drop, a roving mentalist, and much more inside their dedicated lounge with tickets going for $1000 a head. The party begins at 9:00pm sharp and ends at 1:00am; there’s also a $495 option in the main bar area with similar perks (just different pours). Over the top, indeed.

A (very) Fizz is Female NYE
Join Champagne maven Blaine Ashley in honoring female wine professionals with divine pink bubbles, canapés, tarot card readings, and great company at The Poni Room on Bowery from 9:30pm to 1:00am. Tickets are $75—an insane value for what you’ll be drinking.

Bowery Collective’s New York’s Eve
Studio 54 meets the swanky Bowery Hotel at this year’s New York’s Eve hosted by Bowery Collective. Guests will bounce from bar to bar within the old-world glam space, sipping Champagne all evening alongside premium cocktails from the likes of Glenfiddich, Slane Irish Whiskey, and Patrón with plenty of bites to go around. Doors open at 9:30 p.m. with the party going until 2 a.m., with the option to purchase individual or couple’s tickets or reserve a table for anywhere from four to 12 guests.

A Roaring Twenties New Year’s Eve at Le District
Art Deco fans, listen up: In honor of the start of the period’s 100-year anniversary, Le District is throwing a themed New Year’s Eve bash that’s poised to be the envy of Gatsby himself. For $125, guests will have access to a 4-hour open bar, a midnight Champagne toast, plenty of menu favorites to snack on, and best of all, an unparalleled view of the fireworks over the water.

New Year’s Eve at The NoMad
Celebrate New Year’s Eve three ways at the hauntingly beautiful gem that is The NoMad Hotel. With prix fixe seatings at both NoMad Bar and the Main Dining Room and an all-night open bar on the roof accompanied by passed bites and live music, there’s something for everyone who wants to ring in the new year amongst great people and stunning digs.

New Year’s Eve Dinner at Gabriel Kreuther
One of Midtown’s greatest fine dining destinations is going all out for New Year’s Eve with a choose-your-own-adventure roster of culinary experiences. Gabriel Kreuther’s signature Alsatian-accented coursed dinners are on offer at both the bar counter and its adjoining lounge for $175 per person; in the main dining room, the first seating of the evening is a six-course dinner for $295 with the second seating, an eight-course affair, clocking in at $545 (both main dining room dinners also feature a Champagne and caviar cart, of course). All dining experiences include live music and a midnight toast.

New Year’s Eve 2020 Prix Fixe at The Standard Grill
For $165, partygoers can feast the night away at one of Meatpacking’s most beloved dining destinations: The Standard Grill. In addition to the three-course prix fixe dinner of menu favorites, expect shared apps, burlesque, and a midnight champagne toast.

New Year’s Eve Prix Fixe at Rezdôra
On New Year’s Eve, lauded restaurant Rezdôra will showcase chef Stefano Secchi’s culinary ode to the Emilia-Romagna region of northern Italy in two seatings of a seven-course prix fixe dinner. Hearty menu highlights include gnocco fritto with stracciatella and white truffle, strozzapretti neri, and cappelletti with veal and prosciutto; bonus bites will be peppered throughout, and guests will also enjoy a complimentary glass of sparkling wine, a post-meal amaro, and a champagne toast as the clock strikes midnight. The dinner is $150 per person (optional wine pairing is an additional $175). Call the restaurant to reserve.

🍗FRIED CHICKEN & CHAMPAGNE 🥂 Start off the new decade right and join us in Tribeca or High Line on New Years Eve for a menu including: A bucket of our famous crispy fried chicken, coleslaw & buttermilk biscuits, a choice of pie and unlimited champagne (1.5 hrs) for only $65 per person. Reserve now at the link in bio.

Champagne and Fried Chicken New Year’s Eve Dinner at Bubby’s
If you’re looking for something a bit different to celebrate the new year, Bubby’s might have just the thing for you. During their annual 12 Days of Brunch series, you can get down and dirty with festive menu favorites like Swedish pancakes, steak benedict, and eggnog pie at both the TriBeCa and High Line locations from 8 a.m. to 4 p.m. (walk-ins only). At night, reserve a table at either spot for a bucket of chicken, bottomless Champagne, and all of the usual accoutrements for just $65 a head.

New Year’s Eve at Arlo SoHo
Two parties will vertically bookend Arlo SoHo on New Year’s Eve, with the lobby bar serving up craft cocktails to music by a live DJ and the sprawling rooftop featuring a four-hour open bar complete with passed bites and serious views of the downtown skyline. Tickets for both parties cost $125 and include a midnight toast.

Ring in the New Year with Jazz and Georgette at Rotisserie Georgette
The Upper East Side’s favorite fancy rotisserie is serving up festive dishes for both lunch and dinner (think whole roasted goose, suckling pig, chicken, and salmon, and much more); live jazz will play from 9 p.m. until the ball drops. There’s a $35 cover charge and the rest is simply à la carte.

Pizza Party at Moxy Chelsea’s Feroce Pizza & Bocce Bar
There are few better ways to celebrate the end of a decade (and the beginning of a new one) than with unlimited pizza in a chic hotel. On Moxy Chelsea’s second floor, Bar Feroce will have Roscioli pies on offer alongside other passed bites, open bar, live DJ music, and of course, a midnight toast, all for $75 per person. Guests of the hotel will receive a complimentary Rescue Water to help detox and hydrate so as to start off the new year on the right foot.

Miami Vice NYE Bash at Undercote
Get into the ‘80s spirit with a Miami Vice–themed party at Undercote, the subterranean cocktail lounge beneath cult-favorite Korean restaurant Cote. $180 (and ideally a costume) will get you open bar cocktails by Sondre Kasin, wine selected by celebrated sommelier and beverage director Victoria James, bites all night long, an ice luge, a live DJ set, and a midnight toast. Upstairs, Cote is offering an epic $175 seven-course prix fixe with a Champagne tower.

#appreciationpost for the one, the only CHEF @ayesha_rare | a dream in the kitchen 🥘 and can make a mean drink 🍹

A Night in Marrakesh at Shuka
Feast on chef Ayesha Nurdjaja’s Eastern Mediterranean fare all evening (either à la carte or as a prix-fixe meal for $75–$125 per person) while surrounded by the sights and sounds of Morocco (read: belly dancers).

New Year’s Eve Dinner at Rosie’s
This New Year’s Eve, Rosie’s will serve up its solid Mexican fare in two sessions, both free of frills and full of flavor. Order à la carte at the 8 p.m. seating or reserve for the second seating at 10 p.m. as a $58 prix fixe (an awesome value).

New Year’s Eve at The Polo Bar
Call for a New Year’s Eve reservation at The Polo Bar ASAP—this, as usual, is the place to be. Seatings before 9:30 p.m. will be à la carte, and for those who wish to stay for the midnight champagne toast, request a table for 9:30 p.m. or beyond (this is a $300 prix fixe and includes a welcome glass of Champagne as well as a glass for the toast). Live music and caviar, anyone?

New Year’s Eve at Red Rooster Harlem & Ginny’s Supper Club
The first seating of Red Rooster Harlem’s prix fixe dinner (4:30-8:30pm; $76) will be one to remember, but if you can snag a table during the second seating (8:15-11 p.m.; $96), they’ll do you one better and grant access to Ginny’s Supper Club, where Gotham Kings will be playing a live Big Easy set complete with a Champagne toast at midnight.