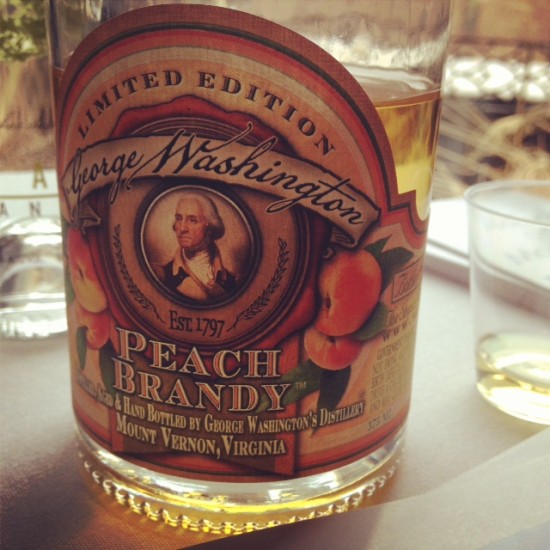 Yes indeed, my fellow imbibing Americans. And apparently, he made a pretty mean peach brandy — so good, they’re making more. On April 1st, the George Washington Distillery at Mount Vernon will release the first version made in 200 hundred years at the 2,250-square-foot distillery. Before you start having recollections of bad schnapps decisions of your misspent youth, know this: it’s special stuff. The project was overseen by the George Washington Distillery manager Steven Bayshore and made as a collaborative project between a handful of some the country’s most stand-out master distillers and small craft distilleries, including Thomas Earl McKenzie of New York’s own Finger Lakes Distilling and Dave Pickerell of Hillrock Estate Distillery in the Hudson Valley. Both spots used local peaches as part of the first-run distillate, which they then brought to the Washington’s exhumed and rebuilt distillery and gristmill on the grounds of his Mount Vernon, Virginia estate.

The distillery itself may well be one of the most spiritually (ha! booze puns!) important preservation projects of the twentieth century, when in 2006 after much fundraising and campaigning, the Distilled Spirits Council of the United States (aka, DISCUS) laid the first cornerstone piece to begin the resurrection of Washington’s hooch-making digs. It’s an interesting full-circle idea, if you think about it: with hundreds of small, craft distilleries popping up all over the country — dozens of which are in our own home state, and many (like Finger Lakes Distilling and Hillrock) — using locally grown grains and fruit to make their mash, it’s a modern-day DIY throwback to the practical work of the original settlers. Interestingly enough, GW’s retirement project, which sourced Virginia-grown rye and corn, was one of the largest in the country, churning out 11,000 gallons at its peak in 1799. The Founding Father would die only months later that same year, and in the not-too-distant future from that, the distillery would fall silent and eventually burn in the nineteenth century. And if that wasn’t a convincing enough nail in the coffin, along came Prohibition. But thanks to some impassioned work, by 2010 the recreated distillery’s first release — a rye — sold out in a matter of hours, proving you can’t keep a well made spirit down.

Only about 400 375ml bottles of the peach brandy were made and you can only get ’em if you go to Mount Vernon (at $150 a pop, the cost makes it something only history buffs or true brandy lovers are likely to consider). When making their part upstate, Finger Lakes Distilling actually made limited edition peach brandy to add to their roster of other outstanding eaux de vie. Co-owner Brian McKenzie told me they ran out, but with a little public revolutionary spirited outcry, maybe they’ll think about doing it again. Operators are on standby.