On the Lower East Side, GrandLo Café Creates Career Opportunities for Local Youth 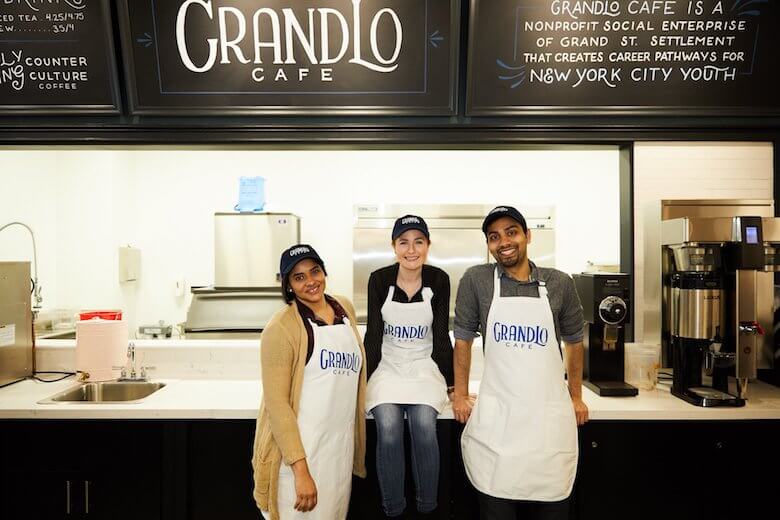 GrandLo Café sits on a sunny corner of Broome Street in the Lower East Side, quietly tucked behind the endless stream of traffic spilling into the city from the Williamsburg bridge. At first glance, it looks like an average coffee shop. Familiar sounds fill the air: a whirring coffee grinder, clinking mugs and the faint tapping of customers on their laptops. Baristas work behind a long countertop adorned with baked goods, bottled to-go beverages and a hand-written sign announcing new vegan milk options. But these aren’t typical café employees. In fact, most of them aren’t employees at all; they’re trainees enrolled in a job training program, the central feature of the cafe’s social enterprise model.

Founded by Grand Street Settlement, a local nonprofit that offers community services and education to kids, youth, seniors and families, the cafe seeks to serve young adults in the neighborhood who face obstacles finding employment. “We see it as building pathways for those who need that first step to break into the career field,” says Clovis Thorn, the managing director of development and communications at Grand Street.

Seated in the spacious cafe beneath a row of black-and-white photographs on loan from the Tenement Museum, Thorn explains how the program targets “opportunity youth,” a population aged 16 to 24 who are not in school and are unemployed. Many are single parents. Some live in the shelter system or have a minor criminal record. Few have completed high school.

A rare and patient on-the-job training

After their March opening, GrandLo has run a successful pilot program. Now, they’re launching a full nine-week course this summer to provide training to twelve people for twenty hours each week. The curriculum cycles through five times per year, and covers in-class ‘soft skills’ like job etiquette and resume creation in addition to hands-on food service training. Most for-profit business provide at most twenty hours of hands-on training after which there’s little room for error. “There’s a lot of pressure and not a lot of forgiveness in that environment,” says Adam Perez, the café manager. He grew up four blocks away and attended Grand Street’s youth program as a teen. After fifteen years spent working for Starbucks, Perez returned to help run the café, train students and develop the menu, which features locally baked goods from Brick City Baking Co. and fellow social enterprises Hot Bread Kitchen and Sweet Generation.

Trainees began with a limited skillset and tremendous insecurity, Perez continues, which requires a level of patience not often found in traditional on-the-job training. “A lot of what we do is help them build self-confidence and allow them to make mistakes which I think is critical. You’re never going to get it all right at once.”

Students receive an $1,100 stipend over the course of the nine weeks and graduate with a New York City food handler’s license, completed resume, employer letter of recommendation and barista training certificate from Counter Culture, a coffee roastery whose nearby training facility provides GrandLo’s students with a robust education (Unsurprisingly, their coffee is proudly brewed at the café).

Support doesn’t end when trainees exit the program. According to Thorn, graduates receive one year of job placement through the Lower East Side Employment Network, plus additional help securing housing and healthcare. “Basically, we’re trying to serve the entire lifecycle of the person,” Thorn explains.

GrandLo is located at Essex Crossing, a new mega development project that occupies a parcel of land previously vacant for over 50 years. The historical ground GrandLo is built on was once a neighborhood of tenement buildings that housed immigrants. During the ill-planned and short-sighted slum clearance programs of the 1960s, the area was renamed Seward Park Extension Urban Renewal Area before being bulldozed. The families, along with hundreds of local businesses, were permanently displaced. Within the eight new buildings of Essex Crossing are 1,000 apartments, half of which are permanent affordable housing units—an overdue attempt to repay families whose homes were razed.

In 2013, GrandLo was chosen by developers to fulfill a city requirement for community space and the agreement includes a massive community center sitting above the café for which rent costs $1 per year. After five years, GrandLo may purchase the space for an additional dollar. Operational costs are low thanks to generous grants from the Borough President’s office, Deutsche Bank, the Cummings Foundation and Wells Fargo. While the program likely couldn’t exist without corporate sponsors, the funds come with little oversight other than ensuring the fulfillment of GrandLo’s stated mission.

“It’s a little Robin Hood-ish, I guess,” laughs Robert Cordero, Grand Street’s executive director. The Chicago-born social worker turned social enterpriser has lived in the Bronx for over 20 years, and prior to joining Grand Street three years ago, helped start Boom! Health, a wellness center in the South Bronx that runs a needle exchange program and provides LGBTQ outreach. Cordero’s passion for working in underserved communities extends from his own history. “I grew up in a Chicago settlement house in the 1970s,” he tells me, crediting his personal and professional success—like being the first in his family to graduate from college—to his Puerto Rican immigrant parents who enrolled him at a young age in the local head start program. While his parents worked full-time, he learned to read and write well-ahead of his peers. “I’m so grateful for that experience because it poured rocket fuel on the rest of my educational life,” he says pensively.

According to Cordero, the historical role of settlement houses to lift people up is the same underlying principle that fuels his work at Grand Street. When given the opportunity “to build something where Robert f***ing Moses displaced 3,000 Puerto Rican, African-American and Chinese families,” (as he puts it) he leapt at the chance. It’s a way to ensure that at least some of those promises made 50 years ago to immigrant families like his own, “even if it’s slivers of them, are being cashed-in now.”