The Champagne Parlor Has Returned, but Its Focus Has Shifted 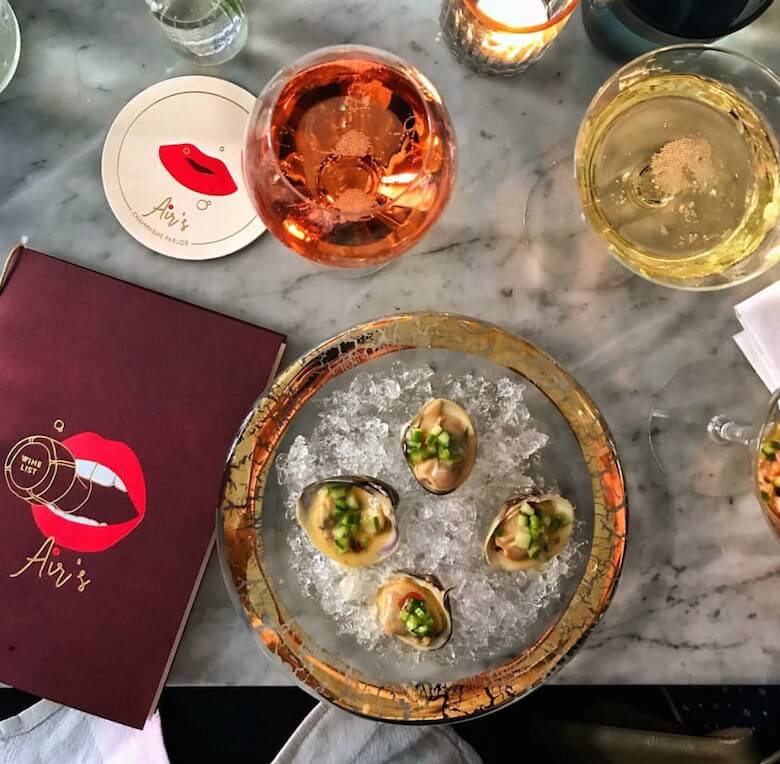 From the nineties into the early aughts, New York City Champagne bars reigned supreme. Here, one would entertain important clients, try to seduce an especially beautiful partner or gather with a group of friends to celebrate a momentous occasion. These parlors offered wildly expensive offerings, from all of the big houses—think Dom Pérignon and Veuve Clicquot.

Enter the recession. It is 2008 and no one has extra money to frivolously throw on bubbles. Soon, these Champagne parlors, once so beloved, dwindled and then closed altogether. Historic favorites such as The Bubble Lounge, one of the last survivors of the movement, shuttered a couple of years ago. For quite some time, only Flute in Midtown remained, but as a shadow of its former glory; the chairs are a bit sticky and selections outdated.

Thus the welcome opening of Air’s Champagne Parlor. The bubble bar we all desperately needed in New York is owned by Ariel Arce, sommelier and an effervescent delight; she created a modern twist on the classic parlor with affordable bubbles, wines from small growers instead of solely big houses and a comfortable space (that she built with her dad).

The timing could not have been more impeccable. Over the last few years, Champagne has become more mainstream. Once only used for celebrations or holidays, you can now find people munching on pizza at Marta while sipping a $64 bottle of grower Champagne or grilling Korean barbecue at Cote (where I run the program), downing bubbles priced from $2,000 to $40 a bottle. Palates have expanded, and just like red and white wine, sparkling now has its place on the dinner table.

So how to avoid the pitfalls of the bubbly past? Arce notes that her restaurant is an “inclusive space” that avoids the cliché of hanging an Eiffel tower poster. Most important, she is a strong advocate for value. “It doesn’t mean cheap. It means good quality at a fair price, and that can range from very inexpensive to splurge worthy. We always want to drive home the message that we are giving you the best quality for the best price, and we won’t compromise that.”

In a bit of an homage to the past, she does avoid the sommelier speak that can turn so many off and now has run rampant across wine bars in New York. “We like to talk about wines in flavors rather than terroir or more esoteric wine terms,” she explains. For those who just like bubbly and want to try something like a “smoked strawberry,” dive in! For the more wine savvy, Arce isn’t scared to pull out her esoteric cards. A former sommelier from the Michelin-starred Alinea group in Chicago, she has some serious chops.

What does the future of the Champagne parlor look like? According to Arce, “Female, empowered and sassy as hell. Passionate about effervescent wine and filled with a glow—not only from our lighting, but from people’s energy and joy. It also has a killer playlist.” We will cheers to that.