Pearls on the Half Shell

Fishers Island Oyster Company captures the terroir of the sea. 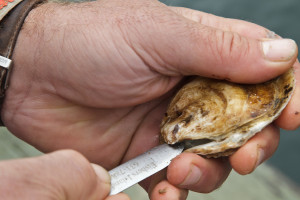 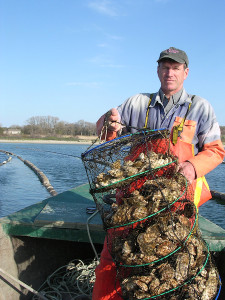 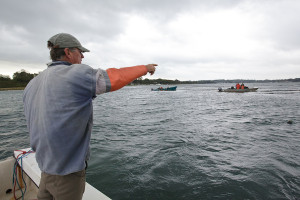 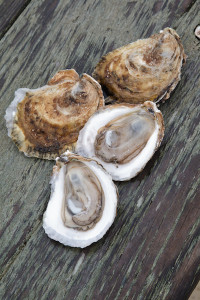 He doesn’t till the soil, but he’s a farmer, with the hands to prove it. They are strong and weather-beaten, and surprisingly gentle when his right hand cradles an oyster and the left neatly inserts a knife into the sweet spot at the hinge. Swiftly, after releasing the shell’s pressure, oyster farmer Steve Malinowski slides the blade across the mollusk’s muscle that holds it shut, lifting the top shell to reveal the silky, opalescent sweet meat bathing in a deep cup of briny liquor. A subtle smile reveals his pride as he holds it up to me.

Standing on a dock on Fishers Island—midway between Montauk, Long Island, and New London, Connecticut—Steve proffers a few more and I don’t hesitate, knowing how easily these toothsome bivalves slide down. It’s 9 a.m. and we’re surveying the shellfish crop on the farm’s five salt-water acres. It’s a few minutes’ boat ride from the working dock, which is nestled in a protective cove off the seven-mile island’s largest, but still quiet, harbor. Part of the farm’s eight-man crew is still out setting lantern nets heavy with mature oysters, all while fighting a strong northwesterly wind coming off Fishers Island Sound.

During the growing season, the crew pull 200 nets, laden with about 500 mature oysters apiece, from the buoyed lines daily, bring them back to the dock to clean, exchange the nets and then return the oysters to the water. On shipping days, Steve and his crew sort some 19,000 oysters, pack them on ice and bring them to the ferry. After a 45-minute boat ride, an awaiting UPS truck will whisk them to a wide-ranging list of New York eateries, including Craft, Má Pêche, DBGB, Balthazar, Gotham Bar & Grill, P. J. Clark’s, Ten Bells, Raoul’s and the Four Seasons—24 hours from “oyster farm” to table.

Their strenuous and repetitive labors are familiar to me. I worked for a stint after college for the island’s only oyster-farming predecessor, Carey Matthiessen, who, like Steve, holds a PhD in marine biology and, like Steve, found Fishers Island, New York, decidedly conducive for raising both seed and market-ready oysters.

Surrounded by the waters of Rhode Island’s Block Island Sound and Connecticut and Long Island Sounds, Fishers Island is a hamlet of Southhold on Long Island, to which it remains wedded by ancient glacier and modern municipality. Otherwise, including its anomalous Connecticut ZIP code, Fishers Island is dependent on the Nutmeg State for its only passenger and freight ferry, based in New London. The quiet island is home to a year-round population of 245. In summer, roughly 3,000 summer folks, mainly from New York, Boston and Philadelphia, flock to the island with its single grocery store and the all-important watering hole, the Pequot Inn, where Fishers Island oysters are served.

“When we have an incoming tide,” Steve explains, “the waters from Block Island Sound flow into the harbor. The higher salinity of the sound waters flowing through the suspended nets gives the oysters that distinctive briny taste.” Microbes and algae in the same tidal flow being filtered by the powerful filterers account for the sweetness of the meat.

These attributes have made the Fishers Island oyster a perennial favorite among New York chefs and bivalve enthusiasts, though most would be hard-pressed to find the remote island on a map. Not surprisingly, chef Dave Pasternack of Esca, who has built a reputation on his knowledge of local seafood, has fished the waters off Fishers Island since boyhood. He considers the Fishers Island oyster “outstanding for its clean, pristine taste.” He says, “Steve’s oysters are amazingly consistent, too. Their shell is strong, not brittle, and they taste like where they come from—those clear, fast-moving waters.”

Steve and his wife and business partner, Sarah Malinowski, both in their 50s, boast the island’s only export and, for this long-ago agrarian outpost, its only farm. In 1979, 10 years before I was on a nearby dock culling oysters for Carey Matthiessen, Steve and Sarah moved to Fishers Island intent on raising a family there while carving out a livelihood working on the water. (I only lasted one season, but island ties have kept me connected with the Malinowskis and, when I’m lucky, with their oysters, too.)

“We started out raising clams, which was an extension of a project I was working on for my PhD,” recalls Steve. “After seven years with clams—and one where we tried scallops—I ended up with some accidental oyster seed. They did very well.” Well enough for the Malinowskis to transition completely over to oysters by 1988.

Carey, who started growing oysters on Fishers Island in 1962, was an industry innovator, especially in spawning for oyster seed production. A growing industry, most aquafarmers today rely on the purchase of miniscule immature “seed” oysters to increase the yield of their yearly harvest. Where Steve first excelled was on the retail end when his oysters reached market maturity. Riding down to New York City with a cooler full of oysters, in the early days Steve had to break in through the back door of the New York restaurant scene, learning the sales pitch along with the oyster business.

Slowly he built a following, though it probably didn’t hurt that his rugged good looks matched the appeal of his product. “In those days it was really just the beginning of celebrity chefs [as we know them now]—back then I could just call up Jean-Georges [Vongerichten] and meet with him a day or two later,” recalls Steve. After building up strong relationships with chefs and other buyers over the years, Sarah now manages the restaurant accounts, numbering some 50 in the New York metropolitan area plus others in Connecticut, Long Island and well beyond.

“We’ve always offered chefs an open invitation to come and see the operation and learn how oysters grow,” says Steve. “Rick Moonen is the only one who’s ever actually made it out here.”

Author, restaurateur and sustainable-seafood advocate Moonen, working as a chef at New York’s Oceana restaurant at the time, recalls his trip out to Fishers Island in the ’90s with characteristic enthusiasm. “I have a deep amount of respect for the product and the people behind it. I got a first-rate education in oyster culture, being out on that unspoiled island with Steve and Sarah. It was a great road trip.”

He continues, “The Fishers Island oyster has great brine—it’s the saltiness of the brine that wakes up your palate, and you taste the essence of the ocean. It finishes with a great minerality and almost a hint of nuttiness. It’s the essence of its terroir.”

During the ’90s Steve collaborated with Carey, whom he considers a mentor, and by 1995 started an oyster hatchery that now accounts for half the business—selling oyster seed to between 60 and 80 other farmers each year. Some of the other oysters found on New York’s raw bar lists, such as various Wellfleets from Massachusetts and Widow’s Holes from Long Island, are in fact hatched on Fishers Island. (It’s the environment in which they spend the remainder of their two- to three-year existence that makes Eastern Crassostrea virginica oysters differ so widely.)

When Carey decided it was time to retire in 2000, Steve took over his business. Raising oysters can be hard on the body. Steve says that after 30 years he no longer lifts the heavy nets. It takes a strong back, imperviousness to weather, and incredible patience to grow a livelihood from an oyster farm.

Still, raising a successful harvest from ocean waters, knowing people enjoy your crop while witnessing the oyster’s environmental benefits, can be extremely rewarding. Up to two gallons can pass through an oyster each hour, while it gobbles up phytoplankton and processes nitrogen. One of Sarah and Steve’s five children (who are now all out of college and all of whom have worked on the farm) is teaching aquaculture at New York City’s Harbor School on Governor’s Island. Along with his students, Peter Malinowski is working to restore oysters to New York’s once-prolific harbor from seed donated, naturally, by his parents on Fishers Island.

To see where it all begins for Fishers Island oysters, Steve and I leave the waterfront dock and hike up the hill to the hatchery housed in a small low-standing building next to their house. From the looks of it, propagating oysters isn’t the sexiest part of the business, but for Steve “it holds the most interest.” It’s actually a multi-stepped process that requires knowledge, expertise and some good ol’ Yankee ingenuity.

Essentially by hoodwinking Mother Nature, oysters are forced to spawn in January (not during summer, as is their nature) with selective brood stock (the deepest cup, fastest growing and so on; think of the sort of seeds a vegetable farmer might choose to save) in salt water held at a constant 26 degrees Celsius in indoor tubs and tanks, each with myriad uses.

Steve carefully monitors their growth as the microscopic oysters grow on a rich diet of housemade phytoplankton until they are large enough to be sold to other oyster farmers or moved. He takes a quantity of young oysters two miles up the island to a large brackish water pond in early March. It’s an idyllic spot edged by lush woods on one end and a rocky remote beachfront at the other.

The young oysters spend a year feeding and growing in the pond—where the same crew constantly rotates them for healthier growth—before they’re moved out to the harbor for another year. The oysters keep growing there until they are market-ready, in nets just under the surface, with rich tidal waters flowing through, garnering the finishing touch of added salinity that makes the Fishers Island oyster so particularly succulent.

Even though I spent most of my own oyster-farming time standing in spew-covered waterproof overalls and rubber boots at a makeshift table gauging mountains of oysters with drilled-out coffee cans (long-since supplanted with higher-tech gadgetry), I’ll always consider the oyster dock my all-time favorite work environment. Looking out over the water and the rows of buoyed crops, it’s a far cry from the urban metropolis where Steve’s oysters will spend their final moments before sliding down another grateful gullet in Gotham.