Despite a modest demeanor and a London address, he might be New York’s most influential cook. 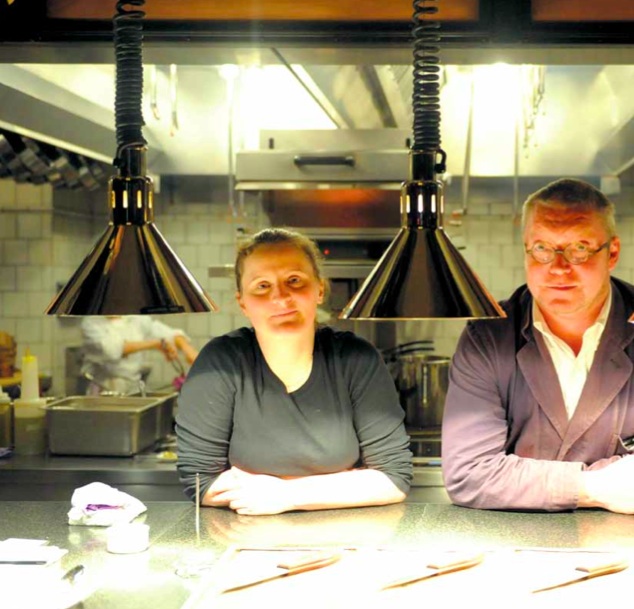 They’re talking about an unassuming, bespectacled Englishman named Fergus Henderson, who’s probably the most influential chef you’ve never heard of. Regarded as the patriarch of the nose-to-tail renaissance (his first cookbook The Whole Beast: Nose to Tail Eating, includes a chapter on lamb brains and sweetbreads, and its sequel, Beyond Nose to Tail, has one entitled “Pig’s Head”). Despite being based in London, Henderson and his restaurant, St. John, get much of the credit for the appearance of cuts like cheeks, tails and kidneys on so many New York menus.  But to the chefs who love him—which seems to be just about every one that knows him—Henderson’s influence goes way beyond the meat on the menu. He inspires chefs not only to cook heart, but also to cook from the heart.

Talk to Henderson and you won’t find a speck of butcherrocker swagger—he’s polite and soft-spoken. Nor does he treat his whole-beast approach as some sort of personal mission. “This isn’t a cause or anything,” he says simply. “I’ve always liked cooking, and once you’ve knocked an animal on the head, it seems disrespectful not to use it all.”

Besides, he adds, it’s all delicious. This is a man who can make spleen sound romantic. “When you eat it,” he says, “it swells in your mouth and becomes sort of charming.” And for all his reverence for simple, local ingredients and well-treated, happy animals, he is a bit edgy about how fashionable that philosophy has become. “It shouldn’t be treated as Prada,” he says. “I’m anxious about getting puffed up about the whole thing.”

Given the reaction so many chefs have had to eating at St.  John, it’s surprising Henderson hasn’t gotten a little puffed up himself. Take Bourdain’s first experience of the restaurant. “It was a bad night,” Henderson tells me when we talk—over glasses of his beloved bitters Fernet Branca—in the St. John bar a few weeks ago. “And all of a sudden there was this guy in front of us saying ‘You rock!’”

What Henderson doesn’t tell me—but Bourdain does—is that he was on his knees when he said it. The meal, he says, was lifechanging.  Why? “It was so bullshit-free,” Bourdain says. “What he was cooking was so straight-ahead what he loved and wanted to do, that when I was finished, I walked into the kitchen and flopped on my knees.”

Since then, Bourdain has worked to spread the gospel according to Henderson, including inviting him to lecture at the Culinary Institute of America. Bourdain admits he was a bit anxious about how it would go. Henderson, who has Parkinson’s, talks very quietly, in quick bursts. (The disease has also forced him to leave the actual cooking at his restaurants to his staff.) “I was very concerned about how these young tattooed slackers were going to receive a quiet British guy with a heavy upper-middle-class English accent,” Bourdain recalls.

He needn’t have worried. “He walked into that packed auditorium, and 400 kids held their breath, leaned forward and listened attentively.”

Henderson got great reviews when he and his wife, Margot, (who now runs her own restaurant, the Rochelle Canteen) took over the kitchen at London’s French House in 1992. Nonetheless, the success of St. John, opened two years later, seems to have taken him a bit by surprise. “If you’re going to come up with an idea for a restaurant, this wasn’t a brilliant, money-spinning one,” he says with a touch of self-mockery: “‘Oh, I’m going to start a restaurant and sell lots of offal and they’ll all come.’”

But come they did. St. John quickly became one of London’s hottest dining destinations. A few years later Henderson added St. John’s Bread and Wine, in London’s East End, and this spring he’s opening the St. John Hotel, which will likely offer some of the best room service anywhere.

Henderson crosses the Atlantic frequently, and has participated in some outsize Manhattan collaborations. For a dinner at Barbuto, Henderson taught Jonathan Waxman and his staff how to make eel pie—a four-day process that started, Waxman says, with chasing the baby eels crawling all over the floor of the walkin: “Fergus loved it.”

But sometimes, as in January, he just comes to hang out, which means the kind of afternoon some of us would miss our own wedding for.

“He can hold his own drinking, he’s always got a point of view and he’s got an incredible sense of humor,” says Batali. “Every time I see him, we have a blast.” (Evidently there’s a reason his first cookbook includes a hangover cure he swears is foolproof.)

“He’s a connoisseur of anything that tastes delicious,” says David Chang, who, during one of Fergus’s visits, hired a car service to take the two of them out to Flushing for an afternoon of multinational overindulgence. “We tried to fit three lunches in before his 5:00 p.m. reservation at Peter Luger,” Chang says.

These visits are a lot more than boozy binges, though. For while Henderson’s affection for organs has won them their place on many New York menus, his real gift to the city’s chefs has been simultaneously more subtle and more significant. In a profession where pleasing customers has often seemed all-important, he has given them the courage to cook the way they want to cook.

“There is no showboating, no bullshit,” says Chang. “His cooking is respectful and understated and brutally honest.”

Waxman credits Henderson with almost singlehandedly killing off the school of “fine dining” that held sway in the 1990s, when how a dish looked was almost more important than how it tasted. Waxman confesses that his old training, plus what he calls his alter ego—that urge to impress that haunts almost all kitchen wizards—still tempt him to fits of fanciness.  Fergus, he says, “has given me the confidence to tell my alter ego to shut up.”

“Fergus doesn’t ridicule public approval—he’s not going to say he’d rather be empty,” acknowledges Batali, “but he doesn’t really give a damn. It’s not that important to him.” It’s that selfassurance—and an ideology Batali describes as one of “kindness and joy”—that chefs speak of more than the recipes for crispy pig tails or lamb brain terrine.

That’s what impressed Dan Barber when Henderson came to Blue Hill at Stone Barns for a special collaborative dinner in 2005, which Barber recalls as “the easiest meal I’d ever done with a chef.” Unlike almost every other chef Barber has partnered with, Henderson didn’t ask what kind of people he was cooking for. Nor did he bother to plan a menu until he arrived and could see what was fresh from the farm that day. And though Stone Barns raises its own animals, Barber says the beastmaster was spellbound by salad greens. “He loved this arugula—he had a childlike excitement about it—and wanted to do a course of it.” So he served it with nothing but a light pesto vinaigrette.

“That took a lot of confidence,” says Barber. “He was saying, ‘Let’s leave well enough alone.’” That’s easy for chefs to say, Barber explains, but hard to do. “We’re very obsequious to diners.” Henderson’s real gift to chefs, Barber believes, has been to free them from the straitjacket of serving what their customers are comfortable with.

Marcus Samuelsson—who’s recently traded the haute cuisine that made him famous for fried chicken and other homespun fare at his new Red Rooster in Harlem—also cites Henderson as a liberating luminary. “It was fantastic,” he says of a meal he once ate at St. John. For him, seeing peasant ingredients—like monkfish liver—at a fabulous restaurant in London for 18 quid was an unforgettable inspiration. “And Fergus has done it in a very honest way,” he add.

Perhaps the New York chef with whom Henderson has spent the most time is April Bloomfield; she and business partner Ken Friedman put him up for a week at the Ace Hotel when he came over New Year’s.

Henderson’s influence can be seen in Bloomfield’s menus, in dishes like crispy pig’s ear and grilled tongue sandwich. “He’s such an infectious guy,” she says, “not to be influenced by him would be bizarre.”

She recalls the time when Marcella Hazan invited Henderson for a meal at her Florida home, and he brought Bloomfield along. Bloomfield got a quick glimpse of the kitchen, and nudged Fergus. “I said ‘wait till you see—there are two shin bones and two marrow spoons.’ And his eyes just beamed.” (Bone marrow and parsley salad is Henderson’s signature dish, the only one that never leaves the menu. And when Bloomfield, after our conversation, gives me a bit of her liverwurst to try, on the plate with it is the very same parsley salad. “I thought you’d like it,” she says.)

The two Brits have cooked together at three annual sold-out fleshfests Bloomfield affectionately dubbed Fergustock. (They are plotting another to be held this April or May.) For these evenings—and similar events at other restaurants, including Momofuku and Barbuto—the routine’s the same: After transatlantic talk about what’s in the market, and a flurry of shopping after Henderson’s arrival, the restaurant staff labors gamely—under the eye of Henderson and his head chef, Chris Gillard—to cook a bunch of ingredients many have never met before. “Cooks here,” says Waxman dryly, “don’t deal with pig’s trotters a lot.”

Bloomfield says cooking with Henderson is a wonderful experience for her crew, who may never have the chance to eat at St. John. “He’s a great teacher,” she says. “He explains why you should be doing something, and he’s very funny. He really draws you in.”

And though would-be diners start lining up for hours ahead of time, the meals are even more popular with chefs, she tells me. Just as Bourdain did after his first meal with Henderson, “they all want to come and bow down at the altar.”