A locavore distributor finds success in a New York State of wine. 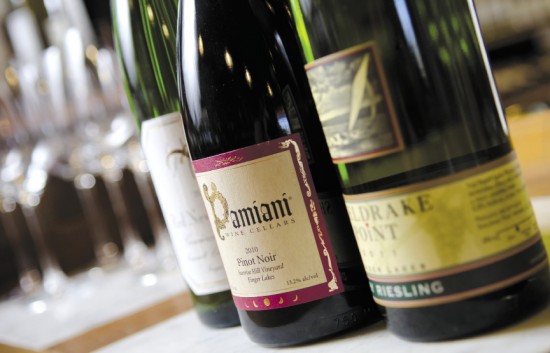 A locavore distributor finds success in a New York State of wine.

Here you can find the best of Bordeaux or brunello, vintages from Argentina and Australia, the boutique bottlings of Patagonia or Pannonhalma. But in a city of endless imports, wines made nearby are often forgotten. One man is working to change that.

While many wholesalers offer global portfolios or specialize in specific regions in distant lands, Kevin Faehndrich’s Upstate Wine Co. is the only distributor devoted exclusively to New York’s own vineyards. So far, that has meant mostly the Finger Lakes, which accounts for 85 percent of New York State’s wine production; it’s also the place where Faehndrich got his start making wine.

It wasn’t the job he was looking for. Faehndrich went to Ithaca College and fell for the area’s college-town energy and natural beauty. In 2007, thinking he could pair his love of wine with his experience in sales (insurance and electronics), he approached John Cupp at Thirsty Owl, a then-new winery on Cayuga Lake. Cupp wasn’t hiring a sales team but did have a spot for assistant winemaker and vineyard manager. It meant a pay cut from Faehndrich’s work in electronics, but he jumped at the chance to understand wine from the bottom up.

Over the next three years, while learning the art of pruning and punch-downs, Faehndrich began to notice something on his trips to see family in the city: Finger Lakes wines were missing from the marketplace.

In-state wineries are allowed to bypass distributors, and some were giving it a go. But vintners like Bob Madill of Sheldrake Point says the Finger Lakes are far enough away from Manhattan—at least a four-hour drive each way—to make direct selling difficult. It’s also fairly expensive.

“I’d spend seven or eight hundred dollars for a few days in New York City and go home not sure I was doing any good,” says Madill. While meeting the maker excites some buyers, others are reluctant to work directly with one winery when they can have access to dozens or even hundreds through a single wholesale rep.

But Fox Run Vineyards owner Scott Osborn says going through a wholesaler wasn’t the answer either. “It’s hard for us to work with a larger distributor,” says Osborn. “The care, love and passion get lost.”

Faehndrich was bewildered that Finger Lakes wines were so rare in the city. Determined to see them offered alongside the best bottles from the West Coast and beyond, he asked Cupp to give him a few cases to try selling. After finding homes for six cases of riesling to a handful of new accounts his first day, he was hooked. He began to write a business plan, gather capital and tackle the red tape that goes along with selling alcohol. In June 2010 Upstate Wine Co. began selling wine under its own license.

Not everyone was receptive. “Things were definitely rough in the beginning,” says Faehndrich. “People were not all that into it.” Fact was, Finger Lakes wines had a bad reputation—syrupy sweet, or reds with no body. In recent years, many vintners had made breathtaking strides, but before buyers could discover that, Faehndrich had to get them to taste—so, in effect, every wine was a hand-sell. He came to operate more like an advertising or marketing company to educate city drinkers about the upstate region’s recent progress.

It worked: Sales picked up steadily and in just its second year, beating out competition that included distributors with worldly portfolios, Upstate won the 2010 Distributor of the Year Award from the New York Wine and Grape Foundation.

Nicole DeCicco, a former wine buyer at the Brooklyn Wine Exchange, was Faehndrich’s first hire. Marketing and history aside, she says, “It’s all about tasting. Now things are a bit easier; the quality of the wines speak for themselves.”

From day one, restaurants have been an important part of Upstate Wine’s success; initially places like Cookshop and Five Points were 90 percent of their sales. Of course, sommeliers could buy these wines direct from the wineries, but working with a distributor can be a lot easier.

“I would much prefer to deal with one person than multiple people,” says Juliette Pope, beverage director at Gramercy Tavern. “Buying direct is a hassle.” She currently buys Thirsty Owl Dry Riesling, Red Newt Curry Creek Pinot Gris and Silver Thread Cabernet Franc from the Upstate book. Pope says the extra cost that Upstate might add to each bottle is insignificant when one considers how reasonably priced the wines are in the first place.

Claire Paparazzo, wine director at Blue Hill in Greenwich Village, says she likes that Upstate offers a tightly curated list. “They work with a handful of wineries that they trust and have sustainable farming practices. It makes me feel like they handpick who they want to work with.”

But while restaurants have become enthusiastic clients, retailers were a tougher sell. That’s because those bottles have to be sold twice—first to the shop, then to the shopper. Too often, says Faehndrich, “[they] just sit on the shelves. People aren’t getting to taste them.”

Valerie Corbin, assistant wine buyer at Astor Wines & Spirits, says having Upstate around changes that for the better. Legally, stores can’t open wines for guests to taste unless there is a representative from the distributor or winery present, so “It’s a great resource when we want to highlight Finger Lakes wines during an in-store tasting; I can ask one company rather than gathering numerous individuals.” She has been sourcing wines from Upstate for a couple of years—everything from zippy, minerally rieslings to chocolaty meritage blends to less-familiar varietals such as lemberger and dornfelder as well as a port-style aperitif.

Looking forward, Faehndrich says the amount of territory in Manhattan, with its high density of restaurants, is daunting, but “every month we sell more than the previous month, regardless of the time of year.” Their list of customers—and wineries—keeps growing, and he recently added wineries in Niagara region and the Hudson Valley—which seems like a big geographical expansion, until you consider his global competition.