A Chelsea wine shop sources biodynamic wine from across the world. 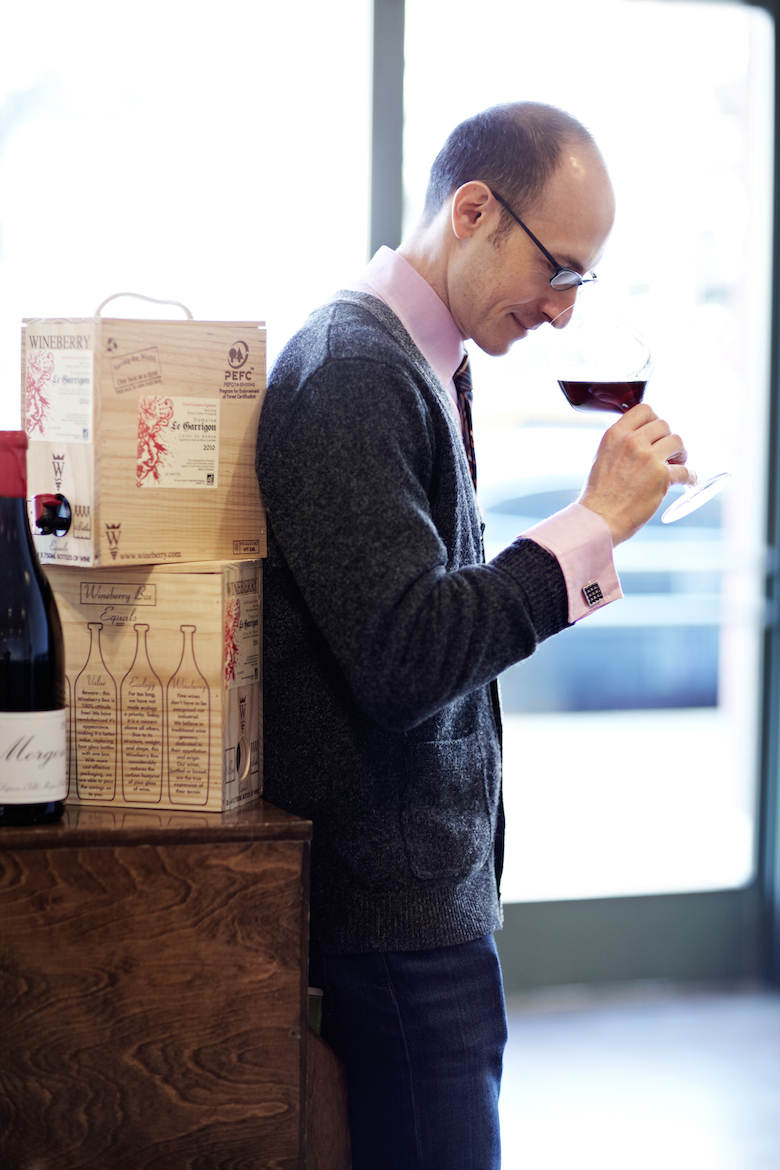 “Tell me what you think they are.”

Scott Pactor, owner of Appellation Wines & Spirits, has placed two small glasses of white wine in front of me and is grinning as big as any a lanky boy from the Lone Star State with a mission. And that’s pretty big.

The wines are a duo of organic whites in the purposely oxidative style typical of their homeland of Jura, France, and, as he says gleefully, they’ve been open for two and one week, respectively.

“Can you believe how fresh they still are? These are from Ganevat, and they are so special. You’d think they wouldn’t last, but they just keep evolving,” he says with not just a little bit of wonder.

When Pactor, now 41, opened his store in 2005 on the then-barren strip of 10th Avenue—long before the Highline brought droves, and even before his neighbor chef Marc Meyer opened his latest locavore-minded restaurant, Cookshop—it wasn’t just his location that seemed not just a little off the beaten track. So did his stock: organic wines, wines made with sincere sustainable practices, wines that were (gasp!) natural with low to no sulfites, and natural yeasts as the if-you-pick-it, it-will-ferment ancient agent to turn juice to vino.

Every single bottle goes through his strict screening—and nearly everything he sells is ecologically farmed and created with as little intervention from the winemaker as possible.

But back then—a mere seven years ago—wines of this nature, and transparency about wine in general, weren’t so easy to find. It was a big gamble on expensive Manhattan real estate to wager that sophisticated, fickle port-city sippers with a world of wine flowing to their feet would even care.

On paper, though, Pactor is not a gambler. He’s pretty much the opposite: An accountant and financial manager by trade, he used to be in the business of seeking monetary stability, not sniffing for volatile acids.

In 1994, Pactor kicked off his career in Dallas working for the monster accounting firm Arthur Andersen. Three years later, he nabbed an opportunity to move to New York City when a job at the Interpublic Group of Companies came up. Here in the heart of the Big Apple, he got the creeping sensation that the corporate world was leaving him less than inspired.

“Depending on how long I’m fortunate enough to live,” says Pactor, “I had what I’d call a quarter-life crisis in 2000.” So he did what any safe-playing, nose-to-the-grindstone 30-something-year-old would do: He took off. Pactor asked for and was granted a leave of absence, stuffed only the necessities into a backpack and hit the trail for South America. It was there, in the vineyards and tasting rooms of Chile, he finally found the thing that excited him—and it made him want to spend the rest of his life talking crushed grapes instead of crunched numbers.

He returned to New York in March 2001, ready to make the big career change, but that didn’t quite jibe with the job market at the time. The economic implosion of the early oughts forced him back into the only profession he knew: working in finance at a Young & Rubicam subsidiary. But Pactor understood that as vines need a few years to produce fruit, he might have to wait for the time to be ripe. Meanwhile, he learned all he could in his off-hours. He kept tasting and reading. He took classes at the International Wine Center. And it paid off. In February 2003, Keith McNally brought on sommelier Chris Goodheart to revamp the wine programs for Balthazar, Pastis and Lucky Strike. Pactor was his first hire.

Goodheart saw in Pactor someone with a passion for wine and a head for numbers and organization. This keen ability to organize and balance the utterly unkempt inventory via spreadsheets and analysis not only made him a rare find, but also added an intensely valuable skill-set to complement Goodheart’s own incredibly broad depth of wine knowledge and game-changing vision for the list. “I feel fortunate he gave me the opportunity to work with him,” says Pactor. He spent his days organizing the various cellars at Balthazar—no small task, as the underbelly of Balthazar runs a full city block.

“It’s huge!” laughs Pactor. “At the time there were three cellars underground and one cellar at street level, and they were just a mess and very disorganized. It was our job to account for and organize everything.” One of the things this dynamic duo found was way too much Burgundy and Bordeaux purchased by the restaurants’ previous wine buyer, who was playing to the hedge fund crowd. Diversity, they knew, would not only make for a more economically friendly wine list, but a much more interesting one, too.

For Pactor, the experience opened up an entirely new world: Wines from the Loire Valley, Beaujolais, Languedoc, Provence and the southern Rhône drew Pactor in with their irresistible complexity, sense of place and, at times, quirkiness.

He spent a year there, but ever-thirsty to learn another part of the business, Pactor nabbed a sales job on the floor for the holiday season at PJ Wine up in Inwood, a highly respected destination shop for Rioja-loving collectors, but which Pactor well knew had the kind of broad stock that offered much for both the crowd-pleasers and the geeked-out finds that those afflicted with oenophilia find irresistible. In other words, it was a place where he knew he would learn—and taste—a lot.

PJ turned out to be pivotal because it was there that he first came across the word “biodynamic,” the farming methodology created by turn-of-the-20th-century Austrian philosopher Rudolf Steiner as a way to grow food holistically, relying on lunar cycles for a natural-centric planning method for planting and harvesting. Steiner’s ideas ultimately led to the organic movement as we know it today.

It was at a tasting of a California vintner that the word “biodynamic” entered Pactor’s vernacular. (“I remember hearing about biodynamic farming and thinking, ‘huh, that’s very interesting!’ ”) Then one day, Pactor heard a wine rep who was doing a tasting say that the wines weren’t showing well because it was a leaf day.

No, that didn’t mean that it was autumn—what the rep was referring to was the way biodynamic proponents divide the days into four categories—root, leaf, flower and fruit—based on the lunar calendar. According to this theory, picking grapes and even tasting wine aren’t recommended on days designated as root and leaf days, only on fruit and flower days.

The whole notion that wine producers look to phases of the moon for important decisions was revolutionary to Pactor—but also made a lot of sense to him. After all, while some of its oddball practices seem a little out there—like filling a cow horn with manure and burying it during a full-moon phase to boost a field’s fertility—the core principles of biodynamic farming are difficult to dismiss. The idea that he’d been sipping and supping on ingredients sprayed with chemicals he wouldn’t spritz on his worst enemy resonated deeply with Pactor, and made him take a hard look at what was actually in the bottles he was drinking and food he was buying.

But looking around New York, a town awash in organic, hormone-free milk, he was baffled that he couldn’t find anyone or anywhere catering to this notion of chemical-free wine.

Pactor knew what he wanted (maybe had) to do. His premise was groundbreaking: a shop in which every bottle came from a place of purity; grapes farmed and fermented in a way that wasn’t polluting the final product or the place it came from with chemical pesticide, an abundance of sulfur or fermentation hocus-pocus more akin to plastic surgery than tradition.

In January 2004 he quit his job at PJ, and within nine months Appellation Wines & Spirits was open for business. At first, though, it wasn’t so easy being green. But he cut a path that had yet to be trod upon in a city of been-there, done-that. And he began by simply asking questions.

“When I was compiling the wine list for the store, I remember asking my importers and distributors, ‘Who’s farming biodynamically and organically? Who’s certified?’” While many of them might have, say, a grower, perhaps two, in their book who farmed that way, the fact was most distributors and importers he was working with at the time simply didn’t know because no one had ever asked. “If you look now, almost every importer I can think of has a list of who’s farming organically and biodynamically.”

He also began to define what it meant for him—and, in essence, the rigorous standards that govern what Appellation would accept on its shelves. He learned of the die-hard followers of Steiner who farm organically/biodynamically and maintain that approach in the cellar, allowing spontaneous fermentations from natural yeasts and eschewing sulfur and other preservatives. He also sought out those who rely on the safety-net control of yeast inoculation and sulfur dioxide in the cellar (and, sometimes, in the vineyard, too). And he learned that some people’s definition of the word “sustainable” can be utterly meaningless.

“Whenever someone comes to us and says that they have sustainable wines, the first question I ask is, ‘What do you mean by “sustainable?”’ because everybody defines it differently.” There’s no legal meaning but Pactor’s own definition falls on the strict end of the spectrum.

This is all you will find on his shelves at his 2,000-square-foot spare-but-bright shop, where the carefully curated bottles are the main eye candy beyond the big picture windows looking out on the hubbub of 10th Avenue.

But the all-eco vino shop wasn’t just changing the face of wild-west Chelsea. It also changed the buying and selling of wine in New York City. Back in 2007 there may have been a few eye-rolls at such a lofty idea; today that revelation has seeped like a biodynamic fertilizing tea into our city’s own vinous rootstock. Not only do most wine stores now offer at the very least an organic section or well-sprinkled selection, some have even gone the route of Pactor and held firmly to only selling wines that fall to the natural, noninterventionist side of the field.

Seven years later, no organic matter is growing under his feet. He knows that understanding what a green wine is means understanding what wine is, and from that notion he began a star-sommelier-taught monthly series of classes—from vino basics to the intricacies of green-centric wine. He knows, from his own beginnings, that while yeast may spontaneously ferment, knowledge does not.

“A big part of this for me is that ongoing dialogue. I like the connection that a store provides—it allows me to have a one-on-one conversation.”

As he says this, he sticks his nose in one of the glasses of Jura wines that we’ve been tasting together, and he smiles again. “This just keeps surprising me.” •