Pastrami populi. The exhibit shows how lunch got, well, sandwiched. 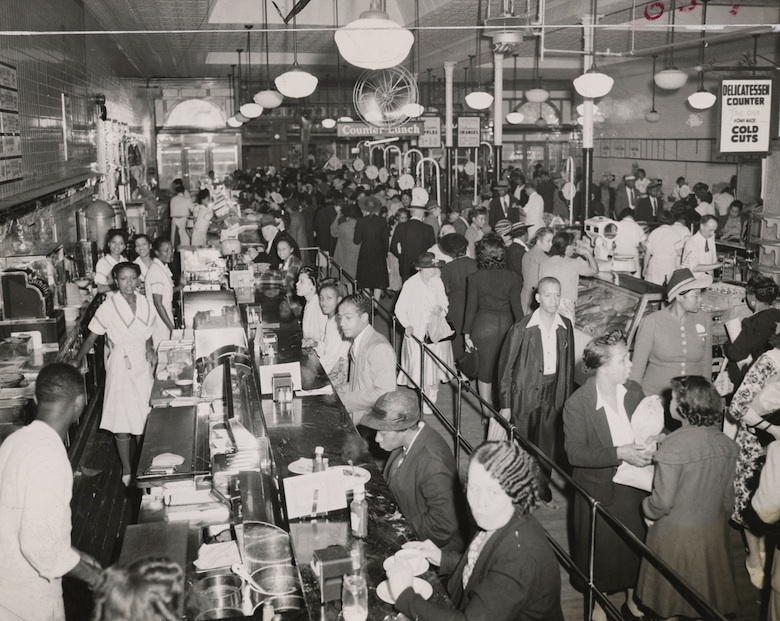 “Lunch Hour NYC,” now on view at the New York Public Library, is a must-see exhibit for anyone who considers the midday meal one of life’s highlights. The show, which runs through February 17, is a survey of roughly 150 years of the repast in all its incarnations, from the plebeian pizza slice eaten on the sidewalk to power lunches that unfold in the plush watering holes of Manhattan’s elite.

The exhibit, co-curated by Rebecca Federman and Laura Shapiro, spans the socioeconomic spectrum. On one end is the manuscript of crusading journalist Jacob Riis’s 1890 exposé of the squalor of Lower East Side tenement life, How the Other Half Lives, which shocked the public and led to the first school lunches, offered in 1908 for three cents each. At the other extreme, the show displays selections from the archive of restaurant impresario Joe Baum, who catered to the titans of finance, advertising and publishing at the Four Seasons (which opened in 1959 with waiters preparing beef stroganoff tableside) and whose Rockefeller Center Luncheon Club offered businessmen bloated from three-martini lunches a nutritional analysis of everything they ate.

A highlight of the exhibit is a reconstructed Automat machine, which accompanies the library’s extensive archive of Horn and Hardart, the company that gave the city its ubiquitous, enormous vending machines, selling prepared foods as well as the idea of better eating through technology.

Other displays examine, as Shapiro, a food historian and author, puts it, “foods that grew up with the city, and are deeply identified with the city.”

Take the lunch meat created on Allen Street at the turn of the 20th century: Romanian immigrants there naturalized their native “goose pastrama” using cheap beef, and pastrami was born. Or consider the handheld standby introduced after 1965 immigration laws brought a large influx of Caribbean immigrants to New York: The Jamaican beef patty became an iconic food in our lifetime, and is now everywhere from pizzerias to school lunch trays.

Shapiro is most excited about a late-19th-century manuscript cookbook, gorgeously handwritten and fragile with age, by society matron Caroline Collier. The hostess included her favorite recipes as well as a complete record of her luncheon menus. Federman, who coordinates electronic resources for the library’s culinary collection, is partial to the manager’s book from Horn and Hardart: “It takes about two people to carry it, and it has all the recipes, and instructions for managers on how to compose a salad or make the coffee,” she says.

Ultimately the show is about much more than sandwiches and soda. Street-side oyster stands are gone but the emphasis on speed is as present as ever.

Indeed, Shapiro argues New York City spawned not just pastrami and hot dogs but the very concept of lunch itself. In rural life, she explains, midday “dinner” had been the main meal of the day, but in 19th-century New York, that changed. Making money came before anything else, and people had only 10 or 20 minutes to eat, often on the run.

“That,” she says, “became the American lunch. Lunch is the exemplar of how Americans eat, and it became that way here in New York.”