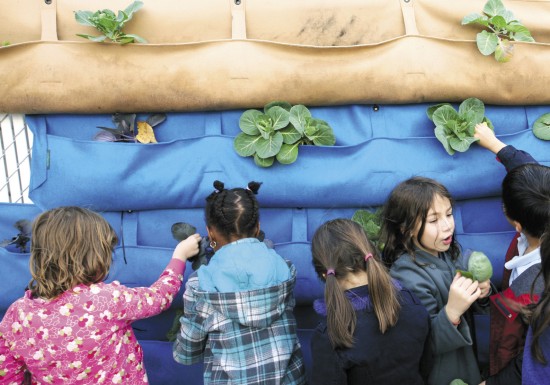 Woolly Pocket is such an ingenious invention, you find yourself wondering why no one came up with an affordable modular living-wall system sooner.

The founder, L.A.-based sculptor Miguel Nelson, actually came upon his inspiration not in California—where the climate and flora are enough to make an East Coast green thumb even greener with envy—but in SoHo. Seven years ago, he walked into the Wooster Street outpost of Paris clothier Marithé + François Girbaud and laid eye on a stunning double-sided tropical vertical garden created by Patrick Blanc, an eccentric French botanist and artist who had pioneered modern soil-free hydroponic vertical gardens in the late 1980s. Blanc’s elaborately lush tapestries carpet the walls of private homes, schools, hotels and museums all over the world.

Nelson was inspired to create something similar for the interior courtyard of a big industrial L.A. event space he owned with his wife, but he couldn’t find what he needed. “In fact,” he says, “it was hard to find any information at all on vertical gardening in the consumer space.”

Plus, as much as Nelson admired Blanc’s installations, they are very expensive to build and maintain. So, after imperfect experiments with hanging baskets, chicken wire, wood and metal, Nelson was struck with a vision: “I could sew pockets out of felted wool to put soil and plants in.”

The dazzling three-story wall garden he created was so successful that in 2008, when he took over another event space on a busy corner in downtown L.A., he wanted to create a similar system on both the exterior and interior. Those early pockets were, he says, “totally slapped together,” but when filled with perennials and succulents they transformed a gritty building that used to be a smog-check station into a teeming jungle. Busy Angelenos driving by would get out of their cars to ask: “Where can I get that?”

Realizing he had unwittingly invented an affordable and easy-to-use system that could help nature-starved landless urbanites reconnect with plants, he and his brother Rodney refined the prototype for commercial production. By May 2009, they were open for business with an infectiously optimistic mission: “To inspire the world to have more fun with plants!”

The original system, called “Wally” (get it?), is essentially a single pocket, big enough to fit a medium-size plant, that is sewn from felt fabricated out of recycled PET plastic bottles. A military-grade moisture barrier keeps walls dry and a back panel called the “tongue” wicks water from the reservoir to the roots. The felt allows the whole thing to breathe and air to nourish the roots and soil. The pocket even gets moist on the outside if you add too much water—a handy warning feature since overwatering is the leading cause of houseplant homicide.

For a more impressive display, Wallys also come in rows of three or five pockets stitched together. All you need is an interior or exterior wall or fence, good potting soil, plants (Woolly’s installation instructions suggest “spillers, fillers and thrillers”), water and a cordless drill, and you’re in business. The whole point is to empower people to be creative and playful with plants and transform cramped urban spaces into tropical showstoppers—no backyard, bank loan or landscape designer needed.

Nelson realized Wally would be perfect for one group that especially loves to get their hands dirty: kids. And because the pockets can hang on chain link fences, brick walls, even under metal stairwells, the system offer a garden opportunity to urban schools without space or funding for a more traditional garden. So Nelson and crew launched the Woolly School Garden initiative on Earth Day three years ago in Union Square; today 1,000 schools across the country have Woolly gardens, with 80 in New York alone.

Having a motivated teacher and parent group is key, but Woolly makes the rest easy. Schools order a $1,000 kit that includes 50 pockets, seeds, compost tea, a planting chart, manual, and pre-K–eighth grade nutrition and gardening curriculum. If they need help raising money, Woolly matches them with sponsors. Kids—not known for their patience—get the instant gratification of having an edible garden in just a few hours.

Case in point: Cindy Wu, who co-chairs the Health Committee with Cynthia Strembla at NEST+m (New Explorations into Science, Technology and Math High School) on the Lower East Side, installed a Woolly garden two and half years ago. “We loved Woolly Pockets because it was the quickest, easiest and cheapest way to green our school year-round,” she says. “Kids from our fifth-grade classes planted the garden in September, and by November they harvested collard greens, spinach and Swiss chard, which they gave to our head cooks, who prepared a wonderful pasta dish for the cafeteria.”

Gina Latici from PS3 in the West Village says Woolly has been transformational. “We now have a garden-to-café program and not only use the produce grown in the pockets in our salad bar and for ingredients in many of the school’s homemade dishes, but the garden has also inspired off-season growing projects like growing mushrooms and pea and sunflower shoots for the cafeteria.”

Although the pockets were a big hit, Nelson got feedback that some people were reluctant to put soil and water in fabric for fear it might leak. “Even though our felt planters were designed so that wouldn’t happen, certain people are more comfortable gardening in rigid containers,” he tells me. “We wanted to create something people could trust.”

He went back to the drawing board and last fall launched the reimagined Living Wall Planter. Although not as cuddly as their original, the new model, made from recycled BPA-free plastic in a ton of fun colors, is about half the price of a pocket, easier to use and even better at conserving water. It has a bigger water reservoir that lets roots self-water for up to two weeks (very helpful for those neglectful types) and a vented shell that allows extra moisture to evaporate, preventing root rot (great for the rest who overwater).

Another cool feature is that unlike typical containers that leach the soil of vital nutrients when water runs out the bottom, both the Wally and Living Wall Planters let water evaporate from the sides, keeping all the good stuff in the soil from washing out the bottom: a big plus for organic gardeners.

More than just inspiring kids and grown-ups to have fun with plants, Nelson wants to reanimate our primordial relationship to nature. “Deep down, we know we’re supposed to live with and take care of plants. They are our cousins.”

Sabine Hrechdakian is a Lebanese-born former literary agent who feels a lot more at home with farmers and fermenters than book publishing types.